The short but prolific career of artist Keith Haring took place during the span of one decade, the ’80s. Bridging the gap between street graffiti and the art world, Haring initially rose to fame from the hundreds of illegal public murals and drawings he made between 1980 and 1985 in the subways and sidewalks of New York City.

“All kinds of people would stop and look at the huge drawing and many were eager to comment on their feelings toward it. This was the first time I realized how many people could enjoy art if they were given the chance. These were not the people I saw in the museums or in the galleries but a cross-section of humanity that cut across all boundaries.”

He believed that art was for everyone and that in order to reach as much of a broad public as possible that there was no better place for it to be displayed than on the city streets instead of the more traditional closed circuits of art galleries and museums.

When Keith Haring was 21, he was becoming aware of street graffiti and street art and in the “publicness” that art can be presented in by making the works during the rush hour among commuters in a very social setting. Between 1980 and 1985 Keith Haring made thousands of what are called chalk subway drawings. These would have been otherwise carrying advertisements for hot dogs or perfume but when the advertisements were expired it would be covered with this black paper. 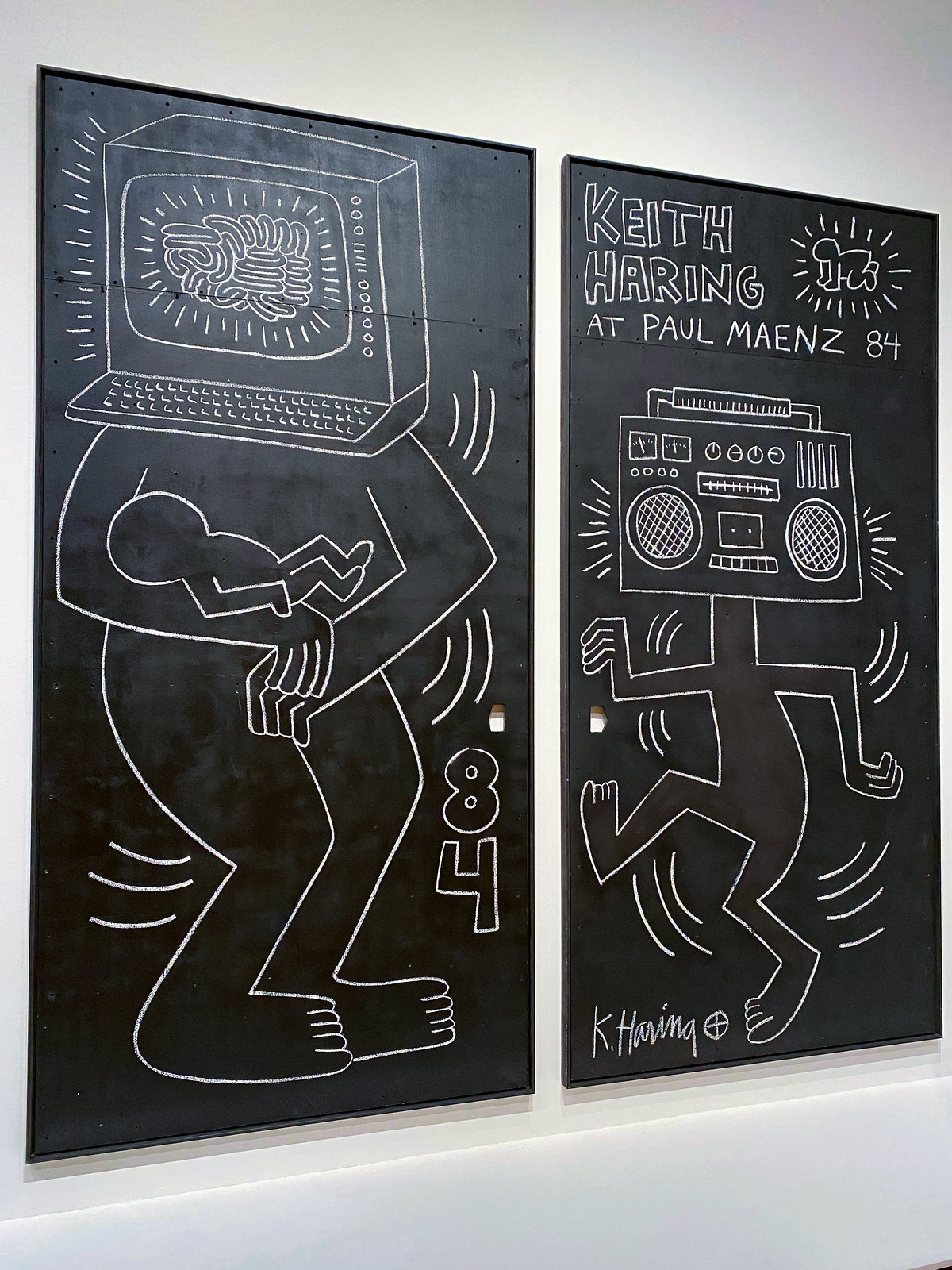 He saw these blank canvases as a a place in which he could present his visual universe. So they would be very temporary, very professional, very generous but also a way of presenting his work in a very public open-handed way. 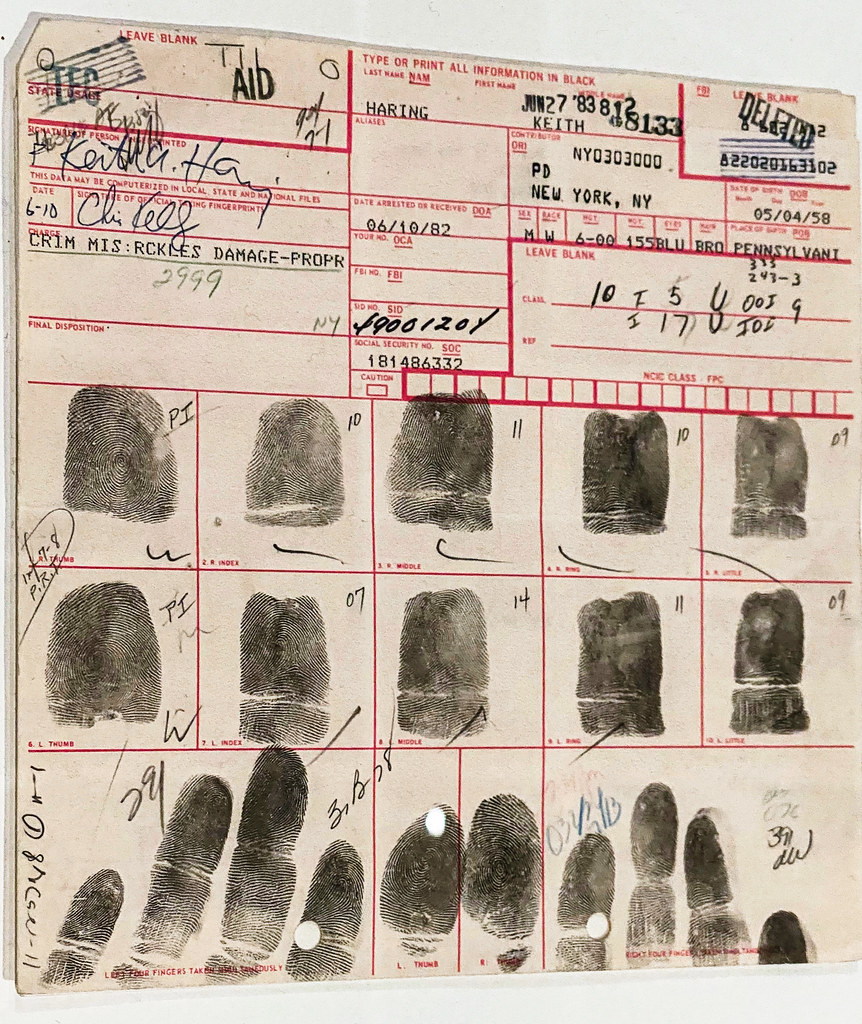 “More than once, I’ve been taken to a station handcuffed by a cop who realized, much to his dismay, that the other cops in the precinct are my fans and were anxious to meet me and shake my hand.”

Early in his career, Keith worked on different mediums that were freely available throughout the city. Like for example, plastic sheeting or wooden panels used in construction or advertising boards in the subways, etc. Observe the two wooden panels, what do we see? We see a TV with Mickey, and a character whose head is a TV. In the 1980″s, more and more homes had a television set. Keith wants to draw attention to the influence that the media can have on us: consumption, manipulation through news. Mickey, is a positive childish symbol, and was all the rage after WWII. Even though this symbol is positive, it is artificial. does not exist and it is a product of the imagination. Already, in the 1980″s, people had started to reflect on the influences of the media and the limits to be set. Observe these above drawings: the symbols are clear, there is no text. The aim here is for the artist to make his works accessible to everyone. The fact that these are clear and visual brings the public closer to his art. Take, for example, abstract artwork: an audience that is not used to attending exhibitions would find it difficult to interpret the message. This is not the case here, the designs are very symbolic.

Keith felt that artists also had a role to play as spokesmen for a society at any given point in history. He purposely chosen a medium that was accessible to masses to addressed hot topics of the era such as: Gay rights, racism, AIDS epidemic, nuclear war, religion and the excesses of capitalism.

By Observing Haring’s work above, we can clearly see that it is a message related to racism. This work plays on empathy, by reversing the roles: where a black kicks out a white holding him on a leash. The Black character is also holding in his hand a cross, symbol of religion. Religion can constitute the origin of a problem. We can take colonialism as an example: most colonies had a religious mission to spread the faith of Christ, but this was used to subdue the local populations and make it easier for the occupation of territories and yield power over them.

Let’s take a look at this work above, which is about the death of the famous singer John Lennon in NYC. The singer was shot and killed in front of his house by an ex fan. The artist, shocked by the news, had a dream of John Lennon with dogs jumping through a hole across his body that we can see in this painting. We can also notice other significant symbols, typical of the artist: The baby on this book is surrounded by lines, symbolizing innocence, but also in some cases danger. Two characters read the bible, alluding to the killer Mark David Chapman, a deranged religious zealot who used to be a fan but sought kill him when Lennon, in a public statement said that the Beatles were “more popular than Jesus” and for some of the lyrics in his songs “God” and “Imagine“.  Mickey, as seen above, can symbolize manipulation and consumption.

The artist rarely dates his works but when he does, the date indicated refers to an event that deeply marked or touched him. Here, we can see in both portraits above and below “1981”, year in which the existence of AIDS was discovered.

He was terrified of how aggressively the virus was spreading in the gay community, being himself homosexual and promoted safe sex through hist art. 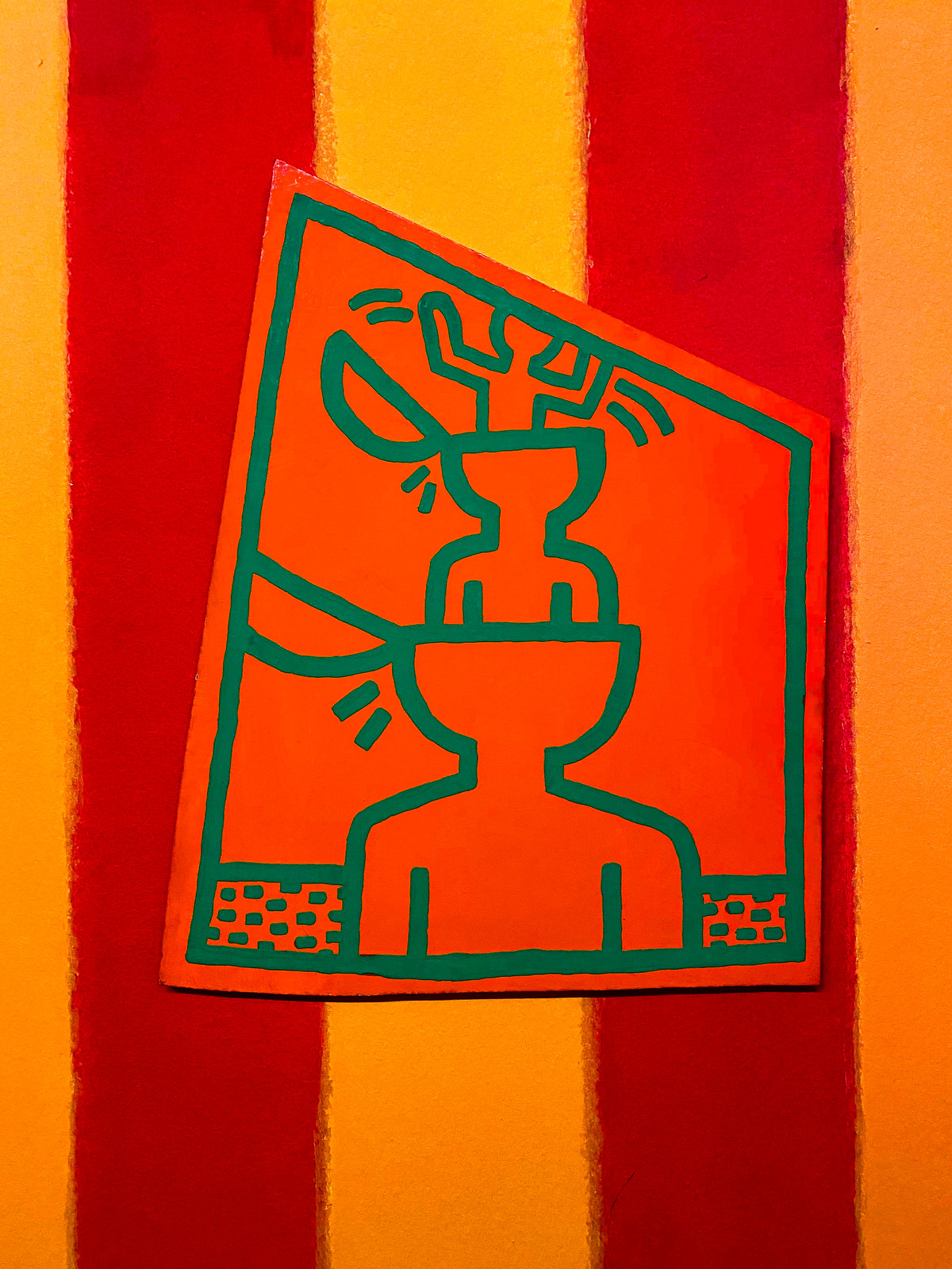 Think outside of the box by Keith Haring

In just a few years, more than 40,000 people are died of AIDS. In 1988, the artist tested positive for HIV as his former companion had contracted it and died 2 years earlier.

We all know his earlier art style, but once HIV appeared in the New York city gay community, this traumatized him as many of his friends died and he knew he was at the time highly susceptible to one day catch the virus.His artistic style has started to change a lot. The features are more violent, touches of red appear. Taking a look at Keith Haring’s drawings above, they are all framed with a red line. Indeed, the framing alludes to comic strip boxes, but the red contrasts with the black. The horned snake that we see there symbolizes the disease of AIDS. The serpent comes out of the frames, which represents the violence, power and speed it’s propagation. This work is in a completely different style from those we have seen previously. During the period when the artist knew he had HIV, he opens up and his work becomes a diary, filled with moments of his life. Keith Haring died in 1990 of AIDS, like many of his friends.

It was in 1983, that Keith Haring really exploding as a pop art superstar and was being invited to exhibit internationally. he was like a sponge he was drawing inspiration from pop art, from the street art, from hieroglyphs and from the hip-hop culture. Creating his very unique visual pop style that became ubiquitous with the 1980’s 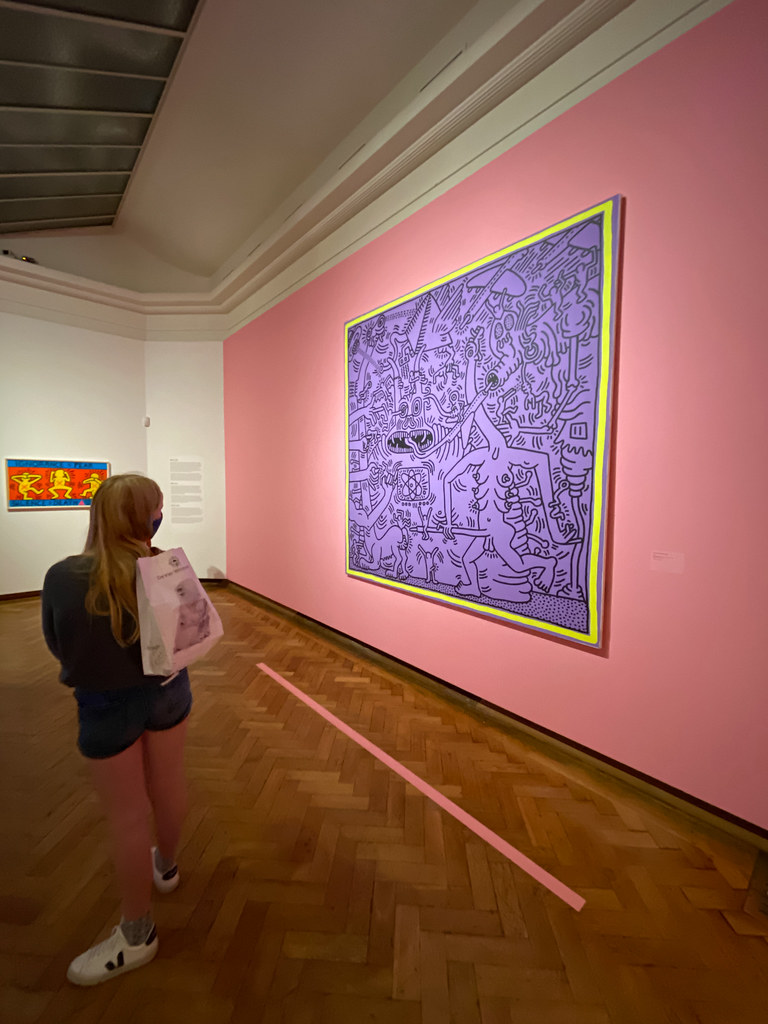 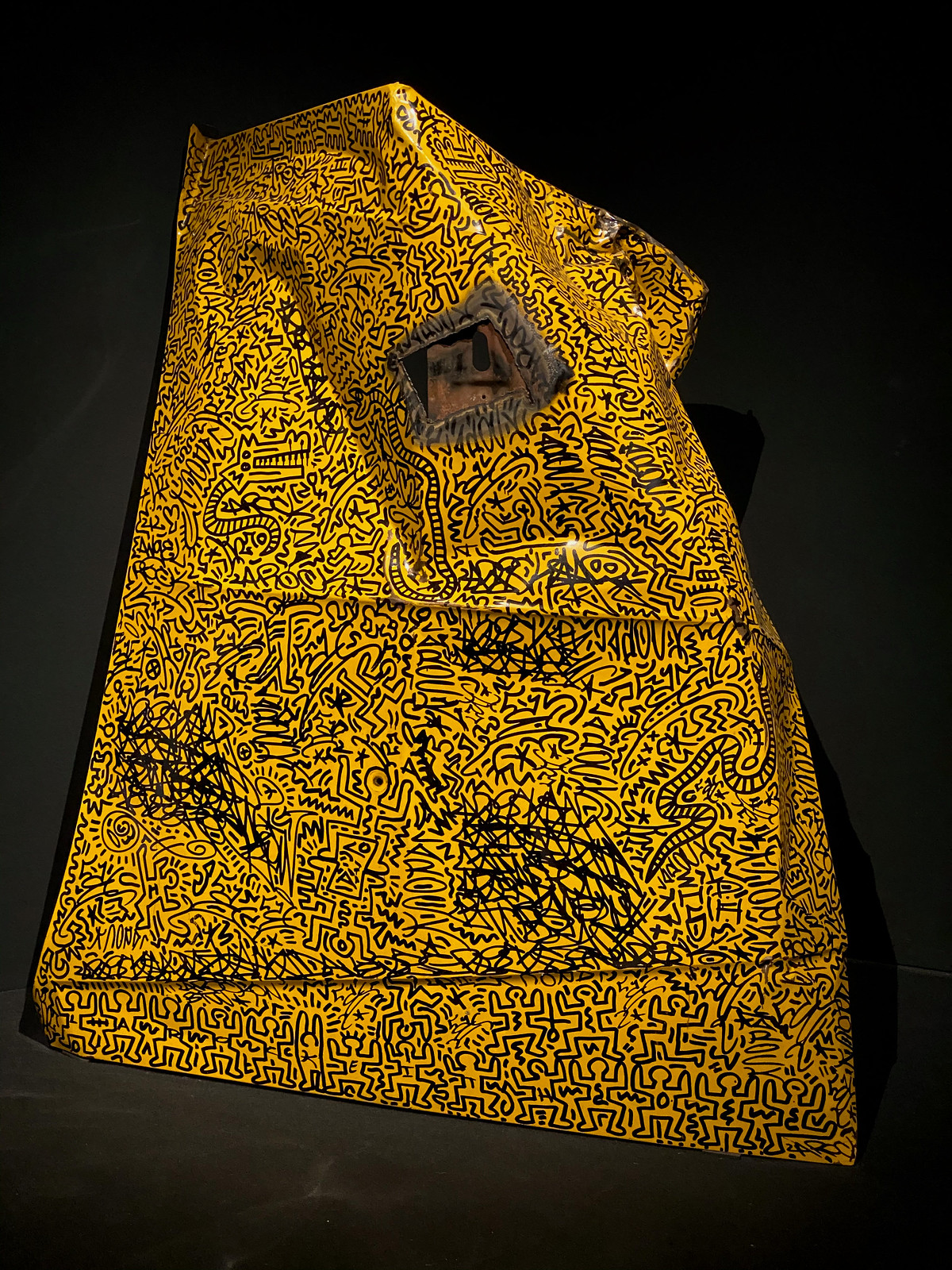 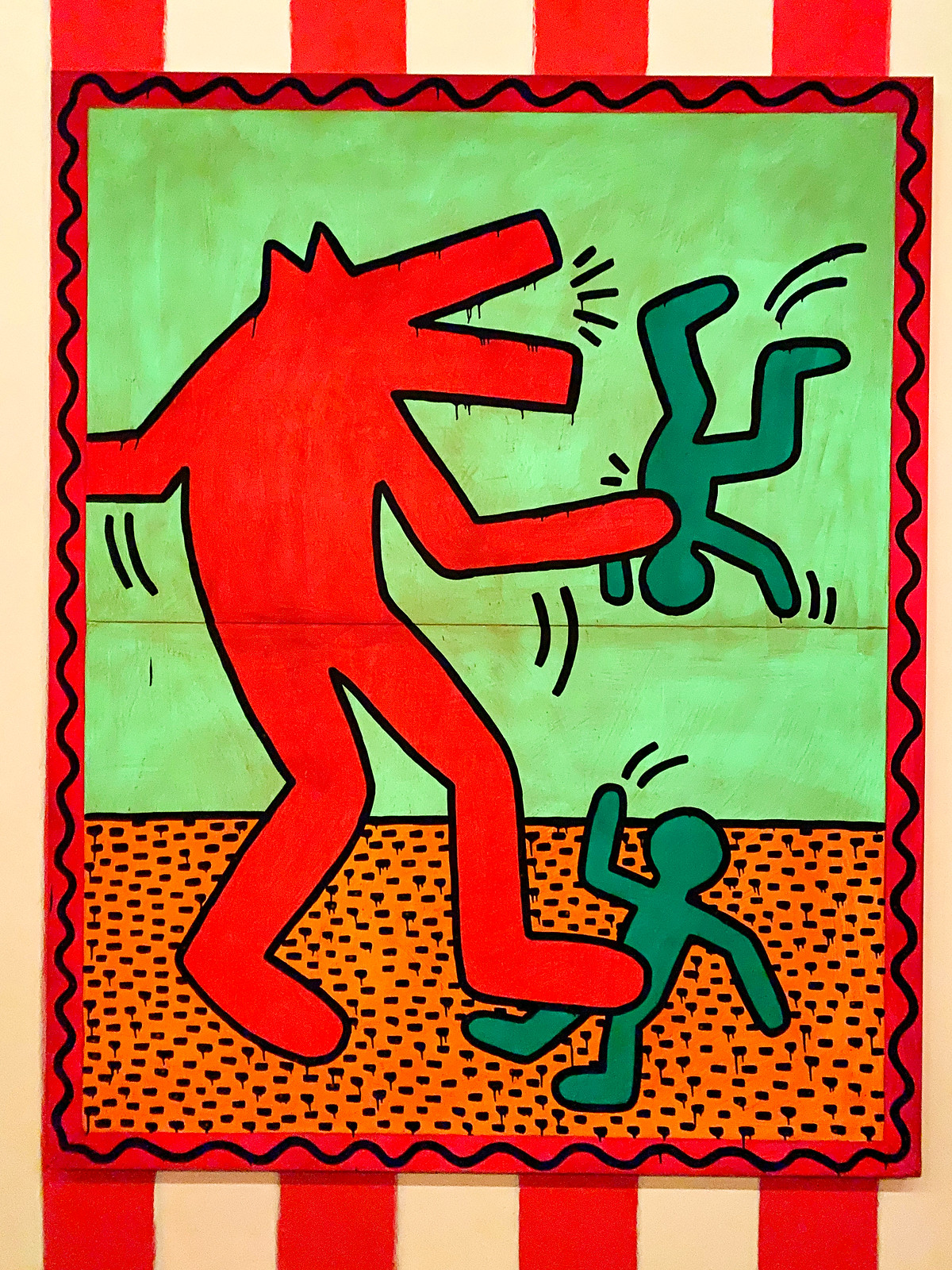 The barking dog one of the main characters of Keith Haring’s art used to call to attention, either for anger or as a warning