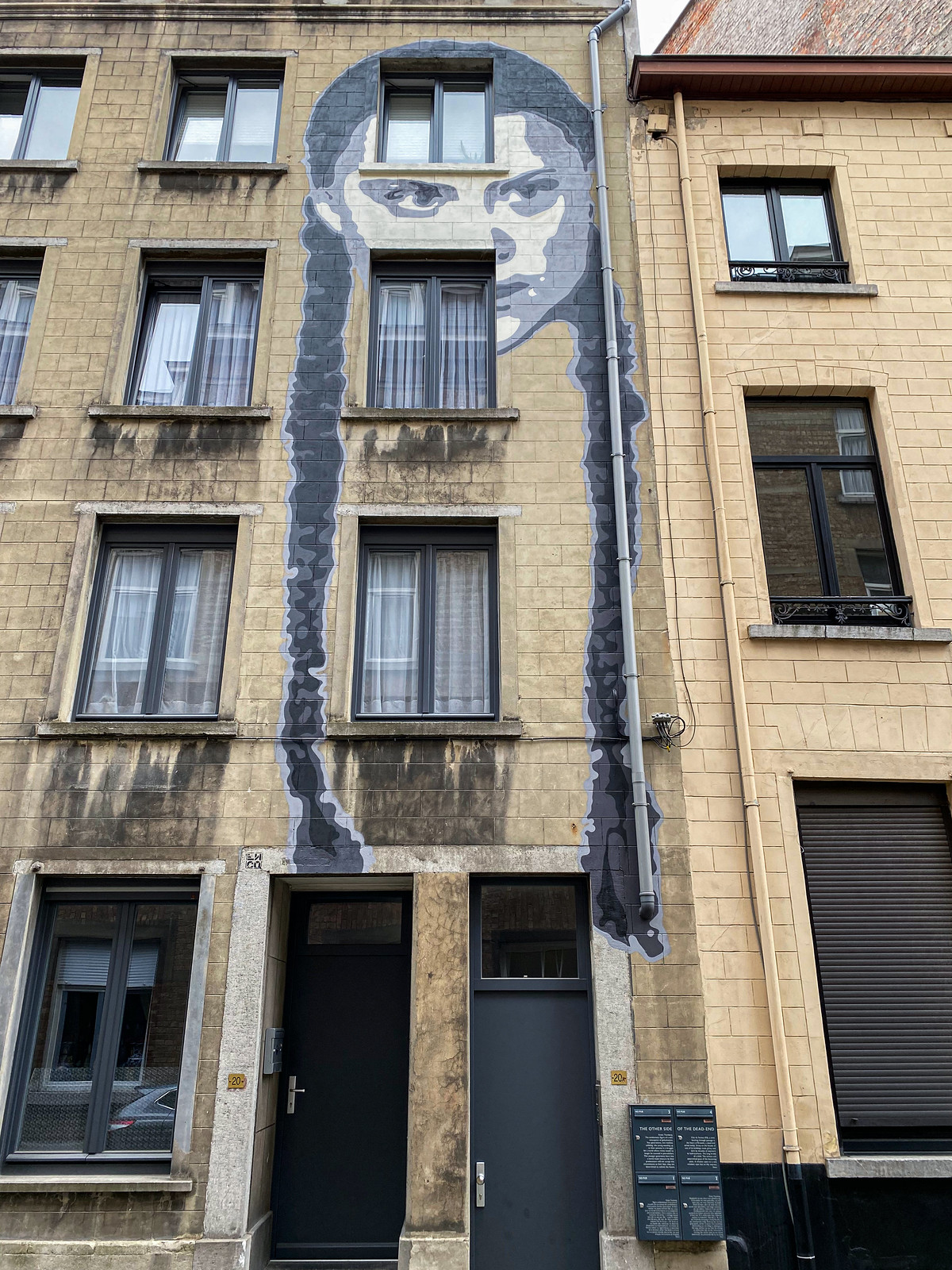 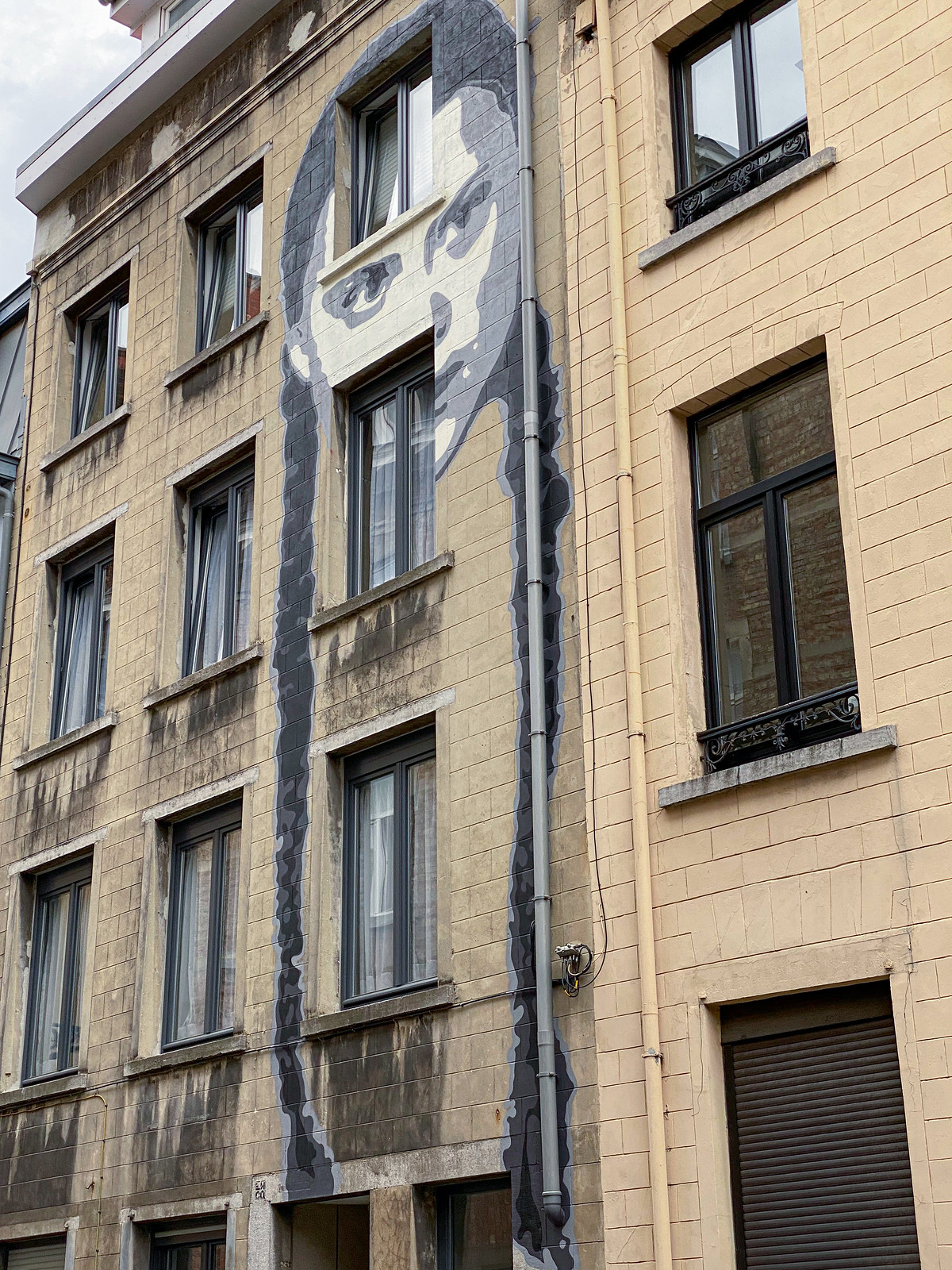 A great place to begin your itinerary is at the Ã‰glise Notre-Dame de la Chapelle (Church of Our Lady of the Chapel) just two minutes walk from the actual start of the street art tour. Right outside of the church where he was both married and buried, you will find a statue of Bruegel recently sculpted by Tom Frantzen. Bruegel’s history is closely linked to that of Brussels, and in particular, to the Marolles district where the tour takes place. It was indeed while living at 132 rue Haute from 1563 onward that he produced his most famous paintings. 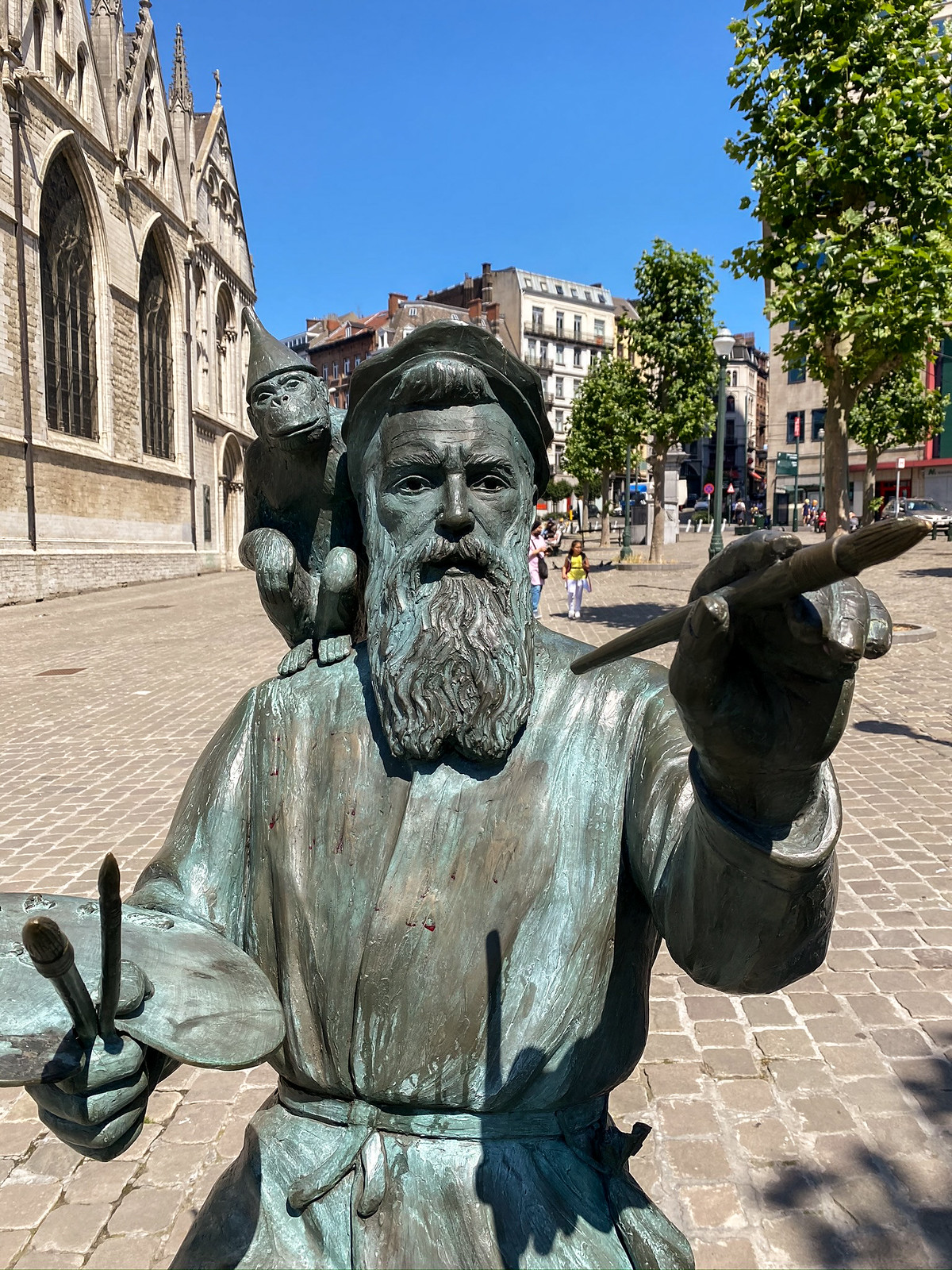 Fred Lebbe here made a faithful reproduction of the famous Bruegel painting â€œThe fall of the rebel angelsâ€. You can also find some of his characters in the Notre-Dame de la Chapelle church, which is right next door, and where Bruegel is buried.

The Patienta (Patience in English) mural is a very colorful and abstract rendition by the Hellâ€™O Collective of the painting of the same name from Bruegel. 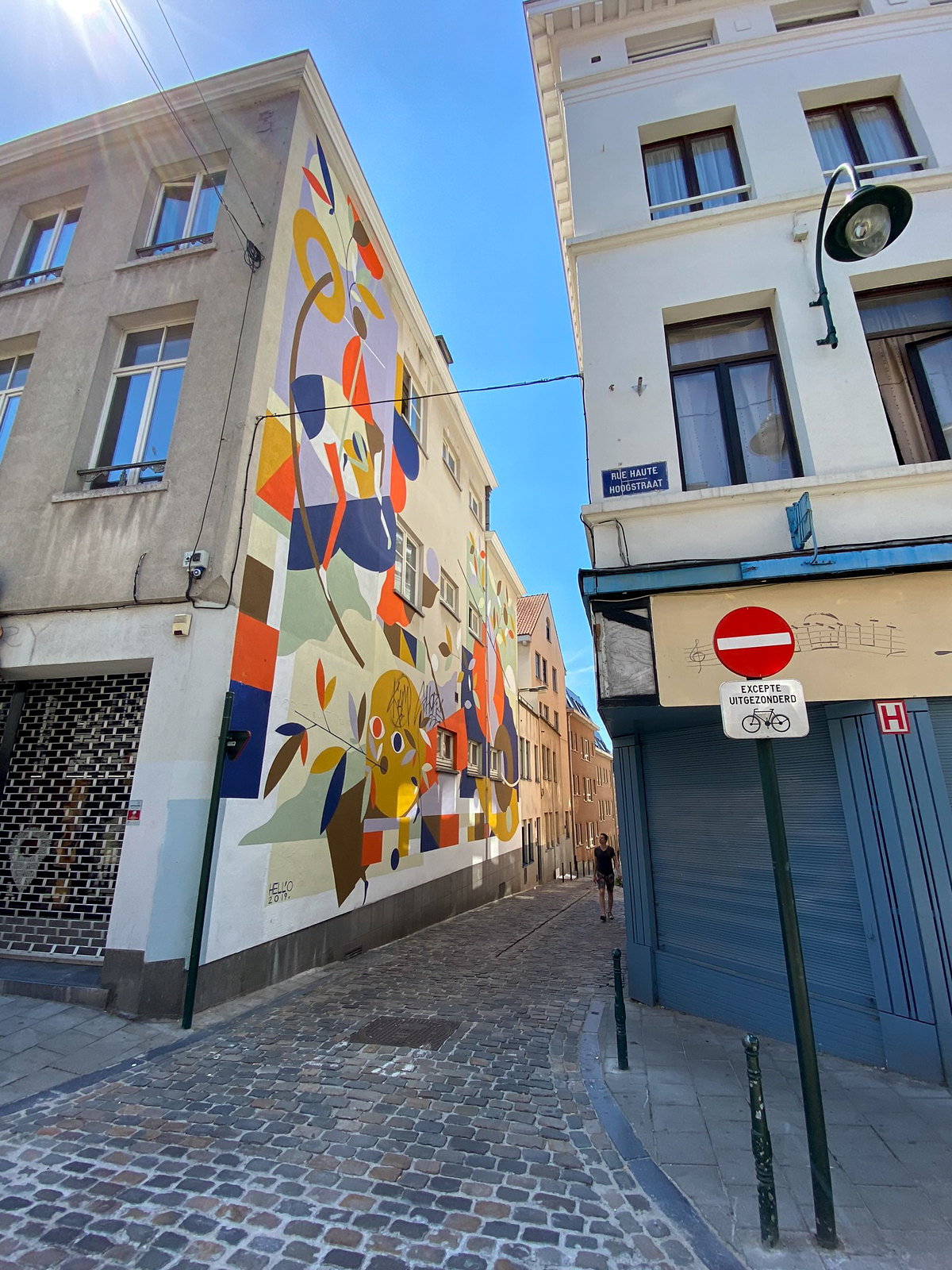 At first, I thought it would take some wild imagination to be able to recognize anything in this mural from Bruegel’s 1556 painting. But the Hellâ€™O Collective explains below.

â€œPatientia by Bruegel is an allegory of patience ( attempting to concretise abstract ideas), our intention was to work on a counter-allegory. To isolate elements of the original work that seemed interesting to us and translate them into simple, balanced and colorful geometric shapes.â€

The Hellâ€™O Collective went on to explained about the Mural

Les Crayons Collective have also invited themselves into Bruegel’s universe with not one but two murals at the end of rue du Miroir. The one above is inspired his â€œPrideâ€ engraving.

The tree, where you can see the character hung, is taken from Bruegel’s painting â€œThe Peasant and the Nest-Robberâ€. The exact meaning of the original is, to this date is still the subject of debate.

â€œI have often been drawn by characters that are a little flawed or in anti-hero roles. Here, I wanted to pay tribute to Bruegel’s art in my own way by focusing on just one of his multiple creatures, isolating it from it’s context in the scene.â€

â€œI chose this piece, of a teacher in the middle of a rowdy class; and I focused on just one character: The donkey which is seen coming out of a window. I positioned my donkey to give the illusion that it was coming out of the wall.â€

Piotr Szlachta reveals his personal interpretation of Joseph & Mary’s â€œFlight to Egyptâ€ on 9 rue des Capucins. The Brussels artist, Born in Warsaw, Poland retains the classic Bruegel style, while adding a few modern touches to the painting like an EU flag. The artist chose this painting, located in one of the most multicultural neighborhoods of Brussels, to remind people that the migrations of populations has always been occurring since the beginning of times. 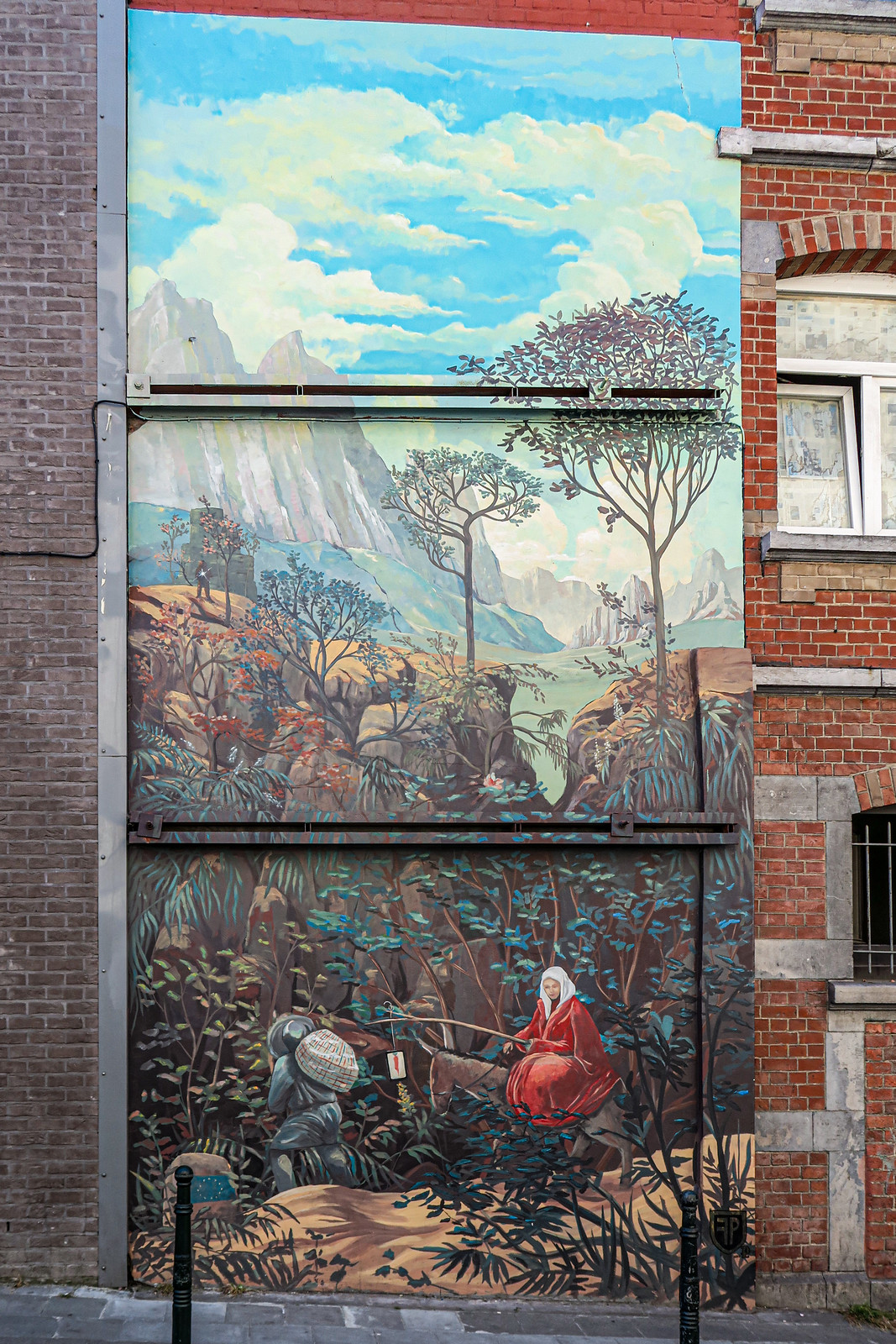 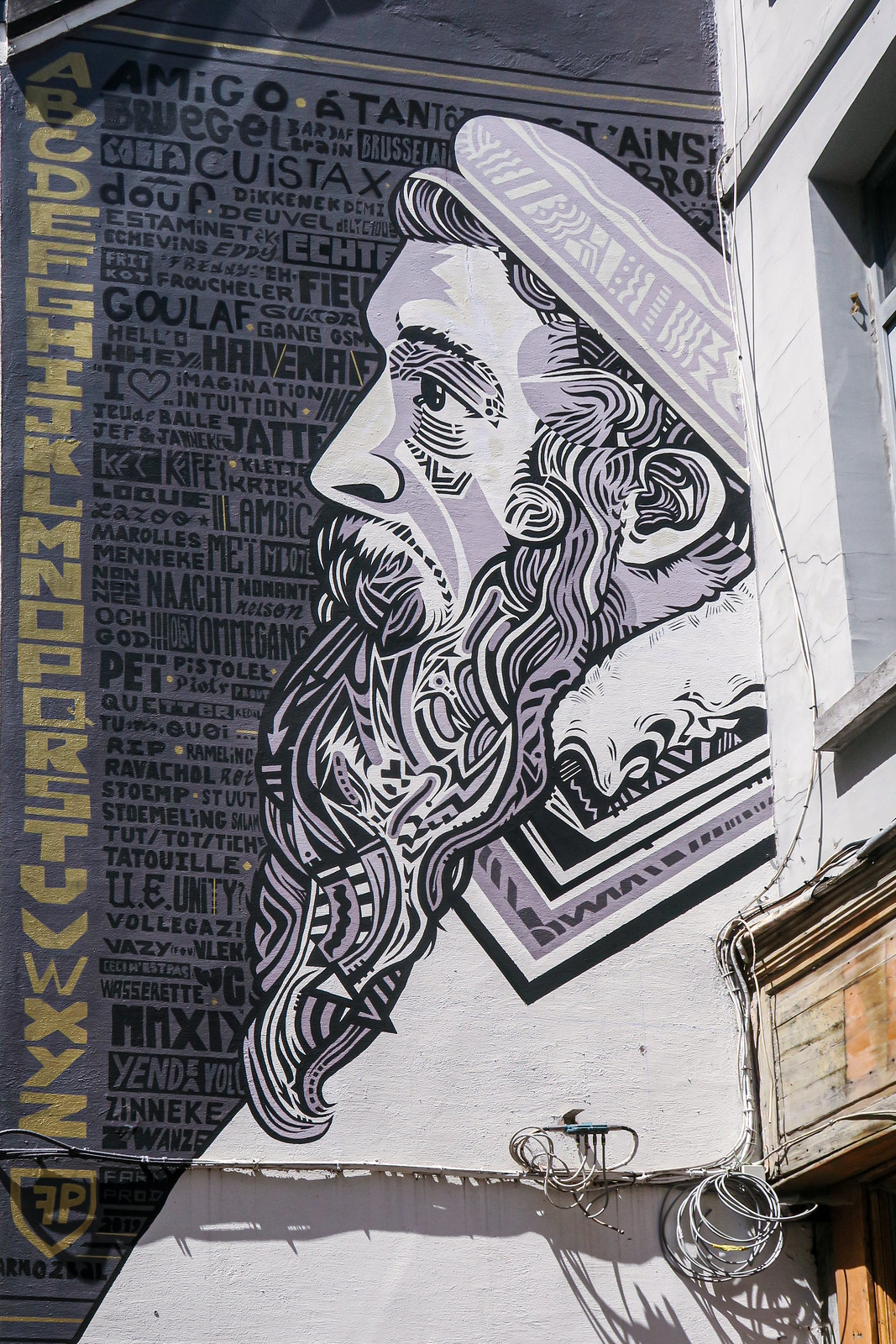 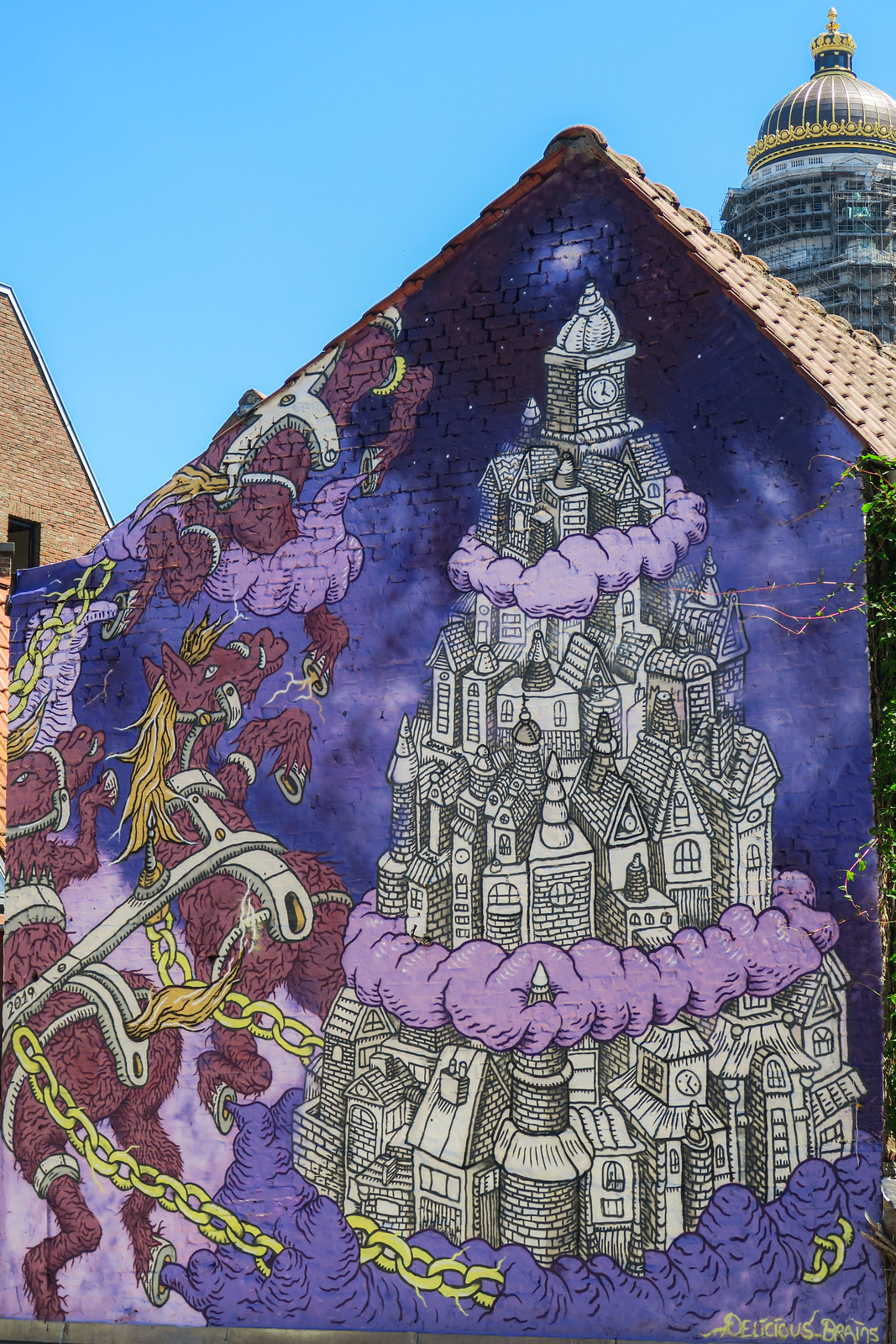 â€œFor me, Babylon represents a symbol of oppression. A dark world where power thirsty men seeking to rule over others by force from one gigantic tower. Sadly, this is still the foundation of our society today. Even though Bruegel painted this many centuries ago, the theme is still very relevant today.â€ 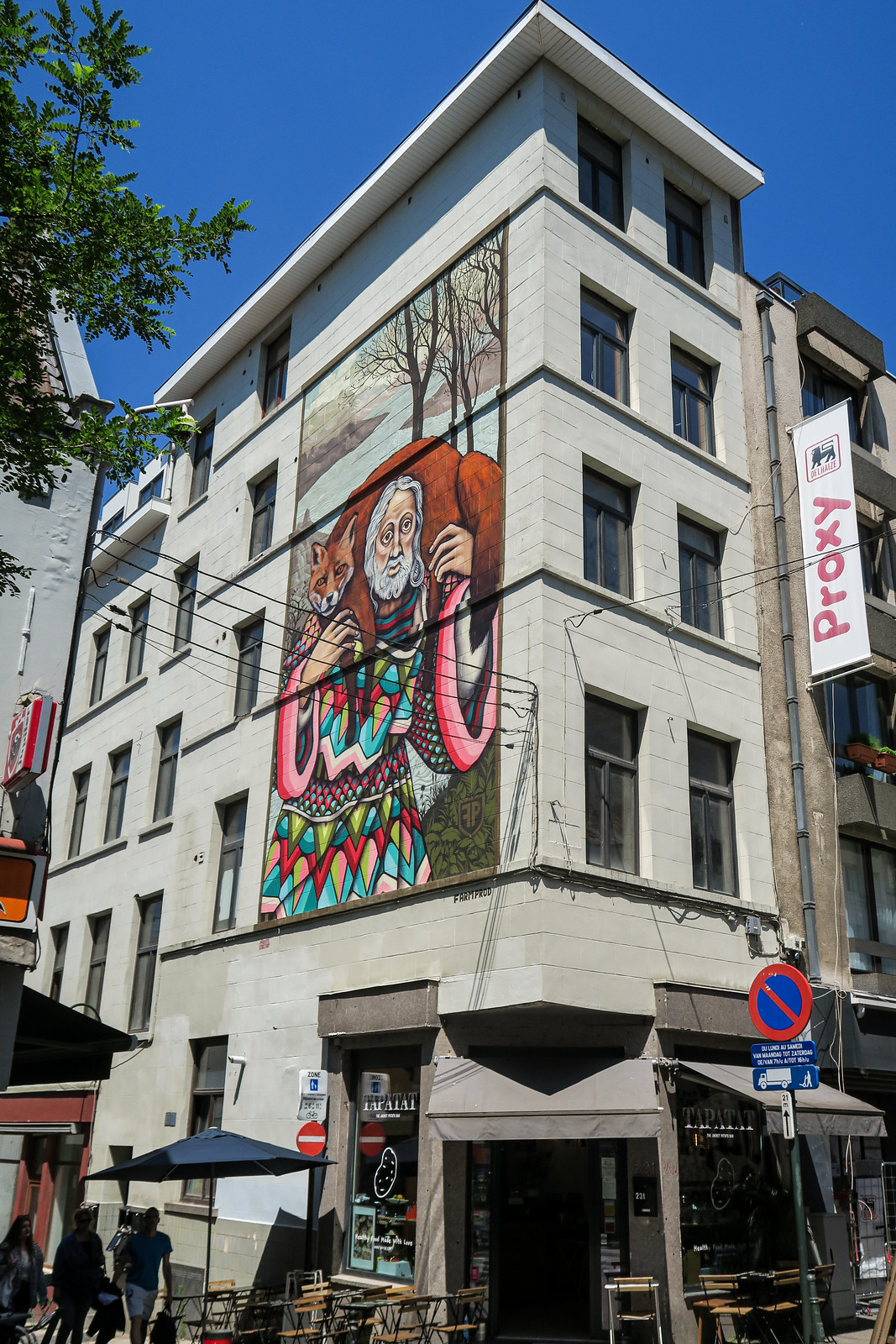 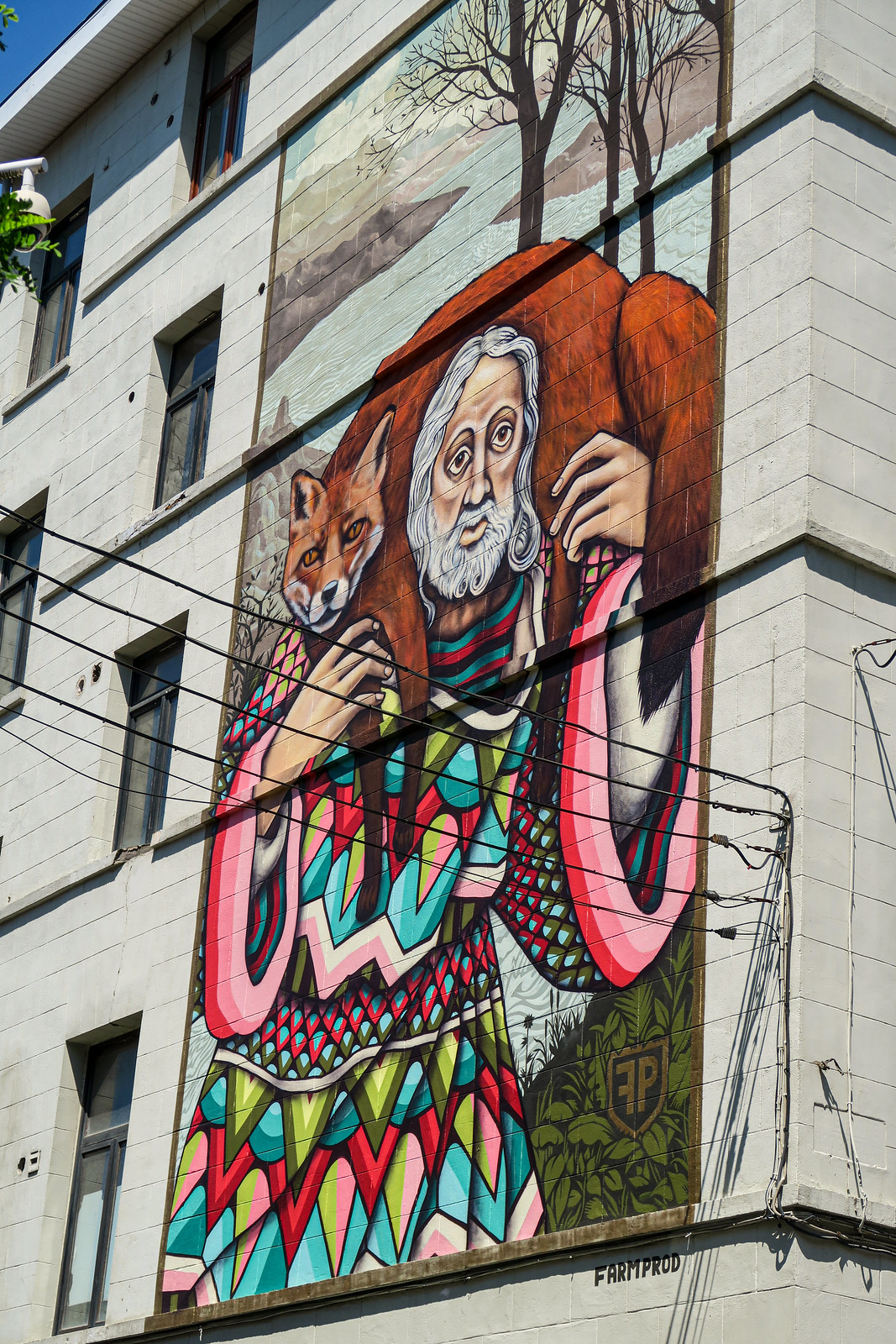 At the corner of rues Haute and La RasiÃ¨re, you will find one of Bruegel’s emblematic works “the hunters in the snow”. But why exactly did artist Gui Tar turn dogs into rats?

â€œI was immediately attracted by the composition and surrealist  atmosphere of this scene. I decided to focus on the hunters and their hounds. By retaining the compositional elements, I transformed the subject and the graphic aesthetic. The scene depicts rat hunters pursued by their prey, all in a fluffy universe which resembles a dream. Itâ€™s a kind of surreal allegory of the absurd.â€ 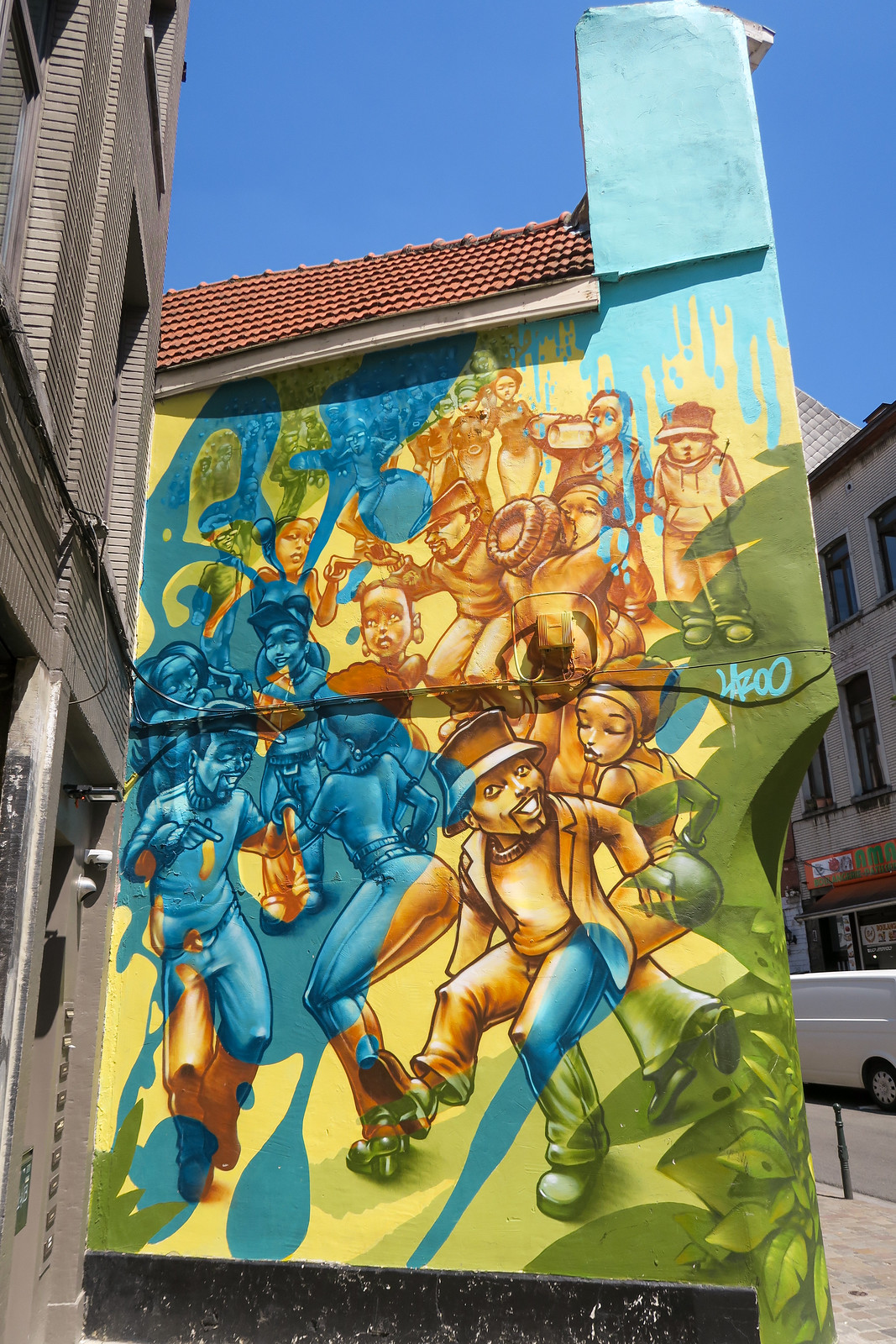 I liked the illusion created by this mural of  an extra pair of windows on the walls of  the Melting Pot Kilo. I stumbled into it after the elevator ride that connects the ville haute and ville basse of  Brussels (the Upper Town and lower Town) on the corner of rue de l’Ã©pÃ©e and Rue Haute.

The Adventures of Tintin Mural located inside the Stockel Metro Station is definitely one of most impressive of the city of Brussels. The sketches featuring all of the 140 characters of The Adventures of Tintin Comic Strip are displayed on both sides of the 135 meters long underground station’s wall. These were drawn by HergÃ© himself just before his death in 1983 and completed by the Studio HergÃ© and Bob de Moor for the opening of the Stockel station on August 31st, 1988.

Happy Metro to You mural by Marc Mendelson

Renowned artist Marc Mendelson wanted to provide a humorous and colorful experience to commuters through his 1974  “Happy Metro to You”  polychrome wood mural at Parc metro station. Born in London in 1915 and member of the AcadÃ©mie Royale de Belgique he his mostly knows for his abstract painting, sculptures, watercolor and modern art work after World War II.

Location of  Park Metro Station Happy Metro to You mural:

Photos of  Marc Mendelson’s Happy Metro to You sculpture:

Marc Mendelson wanted approaching commuters to enjoy a relaxing and fun artwork that could require a bit of work and concentration to figure out.

Happy Metro to You mural in it’s entirety

The wildly colorful “Notre Temps” fresco was painted on the ceilings and walls of the Hankar STIB Metro station by Roger Somville, leader of the Belgian Expressionists Movement. The mural uses a lot of bright and strident colors in shades of orange and red to represent the struggles of the working class to attain social and economic  justice. Somville completed this monumental mural in 1976 with the help of four of his assistants.

Details of the left side

Details of the front

Just around the corner from the Recyclart, under the train bridge at the rue des Tanneurs you will find the impressive work left by the Collective FARM PROD during one of their live painting sessions. Pretty amazing work that’s worth going to take a look if you enjoy urban Art.

Photos of some of the paintings made by FARMPROD:

Guy with scuba mask and Snorkel on the way there

Monsters From An Unknown Planet

The Tour du Midi fountain is located on Avenue Paul Henri Spaak just at the base of this impressive building. I haven’t been able to find any information about this fountain. If anyone does know something please do leave a comment I’ll be glad to add it with the proper credits.

Cat on a bike sculpture

The Cat on a bike is a sculpture made by artist Alain SÃ©chas entitled “La Cycliste” that was ordered by the city of Brussels in 2005 for the sum of 100 000 â‚¬. It can be found just in front of the Galeries Royales on the corner of rue Montagne-aux-Herbes-PotagÃ¨res.

This abstract water fountain made of steel was created in 1995 by now deceased artist Pol Bury. It can be found at the junction of Boulevard Albert II and Baudouin.