ADAM Temporary Exhibit Punk Graphics: Too Fast to Live, Too Young to Die

The Punk Graphics expo: Too Fast to Live, Too Young to Die, was originally created in 2018 at the Museum of Arts and Design (MAD) in New York and is now shown for the first time in Europe at the ADAM Brussels Design Museum. The exhibit is is based on Andrew Kristine’s extensive collection of punk memorabilia that includes flyers, posters, albums, promotional items and fanzines from 1976 to 1986.

In his youth, this New York investment banker was a front-seat witness to the birth of the punk movement. Fascinated by the inventiveness of punk graphic productions, began his collecting early as a teenager, and has accumulated over 3000 pieces over the space of four decades.

His exhibition illustrates in particular the influence of the anti-establishment attitude of this counter culture, which favored a ‘DIY’ and ‘artisanal’ approach at a time when the professional graphic sector were turning to computers. The bands created their own posters and record covers, while fans created flyers and fanzines using typewriters, cutting letters out from newspapers and magazines to design their own rebel typography.

Punk graphics is also characterized by a great freedom of inspiration: all art forms, teen pop culture (comics, popular novels, science fiction, horror films, etc.) or the style of the 1950s and 1960s were appropriated freely. Collage was the reference technique; stencil the preferred mode of reproduction; contestation, irony and bright colors the essential ingredients.

There was a reciprocal relationship between the art world and the punk music scene, especially in cities like New York and London. The Andy Warhol influence can be easily seen for instance just below with the portraits of artists below of Elvis Costello, Nick Lowe, and Ian Dury.

After studying graphic design at Manchester Polytechnic in 1978, Peter Saville became one of the founding members of Factory Records. Saville created many memorable album covers and promotions for bands and projects associated with the company including designs for Joy Division and its successor band New Order. In step with the postmodernist tendencies of the times, Saville often looked to art and design history for inspiration. For this poster below used to promote the album Closer, Saville explores the neoclassical. 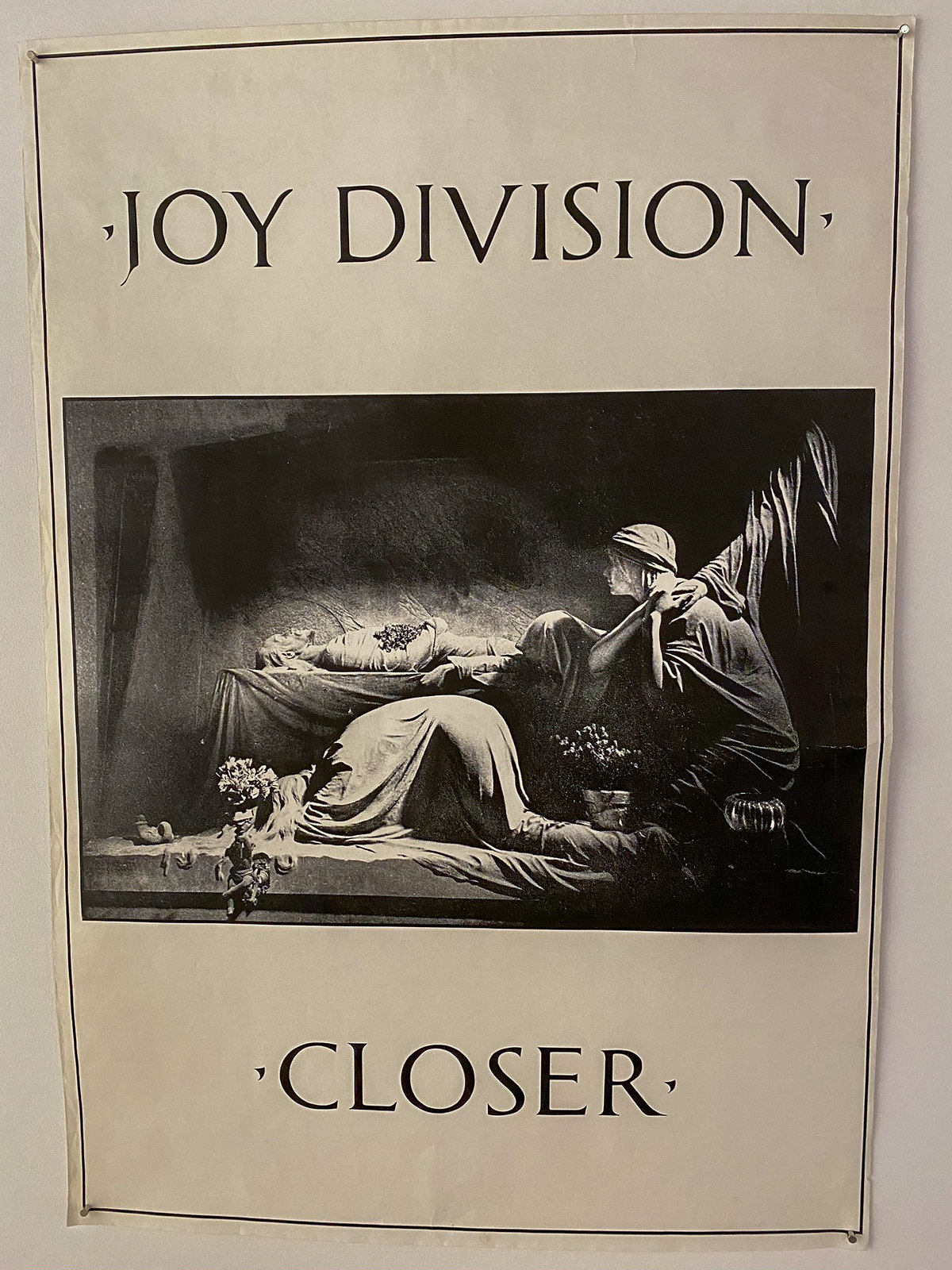 The poster features a contemporaneous photograph taken by Bernard Pierre Wolff of the Appiani family tomb in Genoa’s famed Monumental Cemetery of Staglieno, sculpted by Demetrio Pernio around 1910. Rendered beautifully in dramatic light and shadow, it depicts the scene of the family’s bereavement. The image and the classical typography were chosen for their ability to quickly contrast the very modem music of the band with this seemingly ancient image in which it was wrapped. It was, however, an image whose grieving tone would be brought much closer to home following the tragic suicide of Joy Division’s lead singer Ian Curtis.

One of the most iconic images of rock music (below on the left) when Pennie Smith captured The Clash bassist Paul Simonon smashing his guitar against the stage during a concert at The Palladium in New York in 1979. The image is framed by the pink and green typography mimicking Elvis Presley’s 1956 eponymous debut album.

Despite these two strong visual elements, this promotional poster owes much to artist Andy Warhol and his use of repetition. The horizontal step-and-repeat of the design creates a still animation effect of this frenzied action, while also alluding to Warhol’s own series of Elvis canvases, which ranged from a single iconic pose to multiple repeat images of the singer. 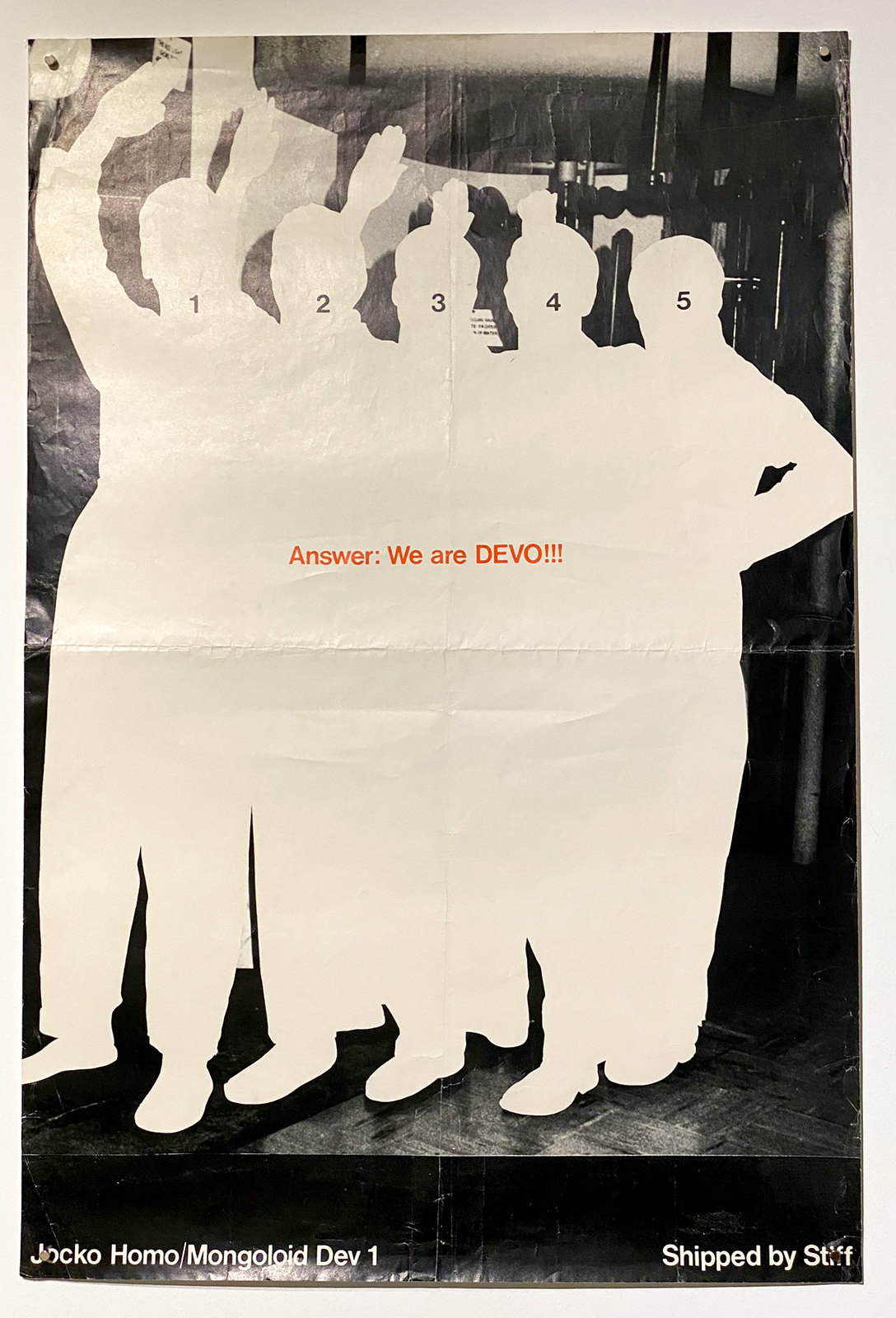 Answer WE ARE DEVO Poster!!! The mention on the bottom refer to “Jocko Homo” the B-side of their 1st single, “Mongoloid”

Jamie Reid, creator of legendary graphics for the Sex Pistols, designed this poster to promote the single California Über Alles, an anti-fascist song from the San Francisco based Punk band the Dead Kennedys. The title refers to the first stanza of the German national anthem “Deutschland, Deutschland Über alles” (“Germany, Germany above everything”), a lyric that was dropped following the end of World War II because of its close associations with Nazism and anti-Antisemitism. 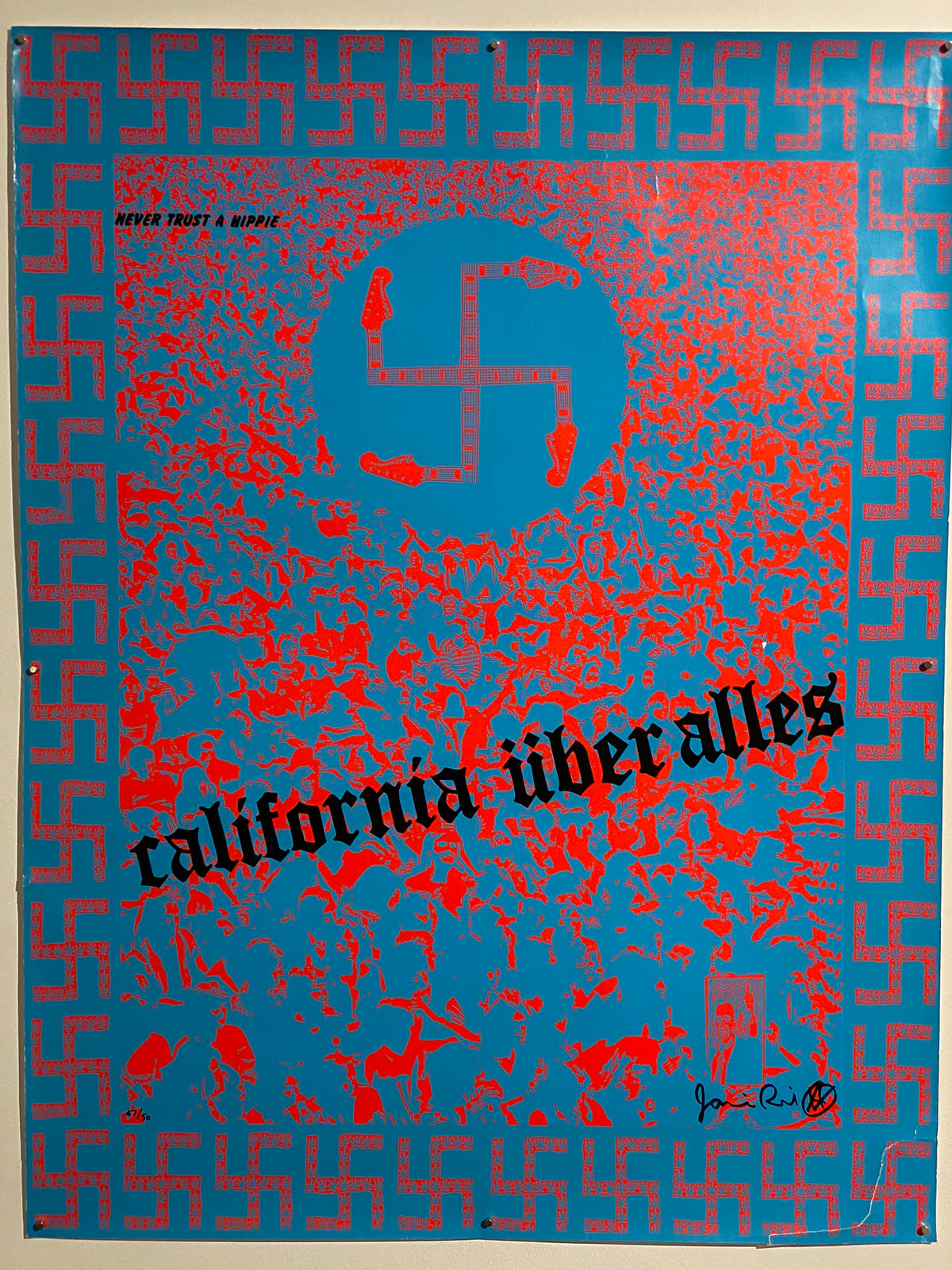 The 1979 song is a satirical attack on Jerry Brown, then Governor of California (1975-1983) and depicts a fascist vision of a future America based on post-hippie values. In this imagined totalitarian world, a California ethos of healthy living, cheerful music, and fashion-consciousness dominates a docile society ruled by a liberal dictator. Reid uses the swastika adorned with cannabis leaves to create a decorative border, a design treatment that evokes its pre-Nazi era use as a symbol of good fortune in, among other things, architectural pat-terns and decorative tile work.

Long before the swastika was adopted by the Nazis in the 1930’s, it was widely used in various cultures around the world for centuries, from its ancient roots as an Eastern religious icon in Hinduism and Buddhism to a sign of auspiciousness and good luck in Western Greek, Celtic, and Baltic traditions.

The same year in 1979 and at the age of 21, Jello Biafra ran for Mayor of San Francisco. His platform was quite unconventional and included ideas such as requiring police officers to run for election by the residents of the neighborhoods they patrol, legalizing squatting in vacant buildings and forcing businessmen to wear clown suits within the SF city limits, He came In 3rd out of 10 In the Mayoral Race. 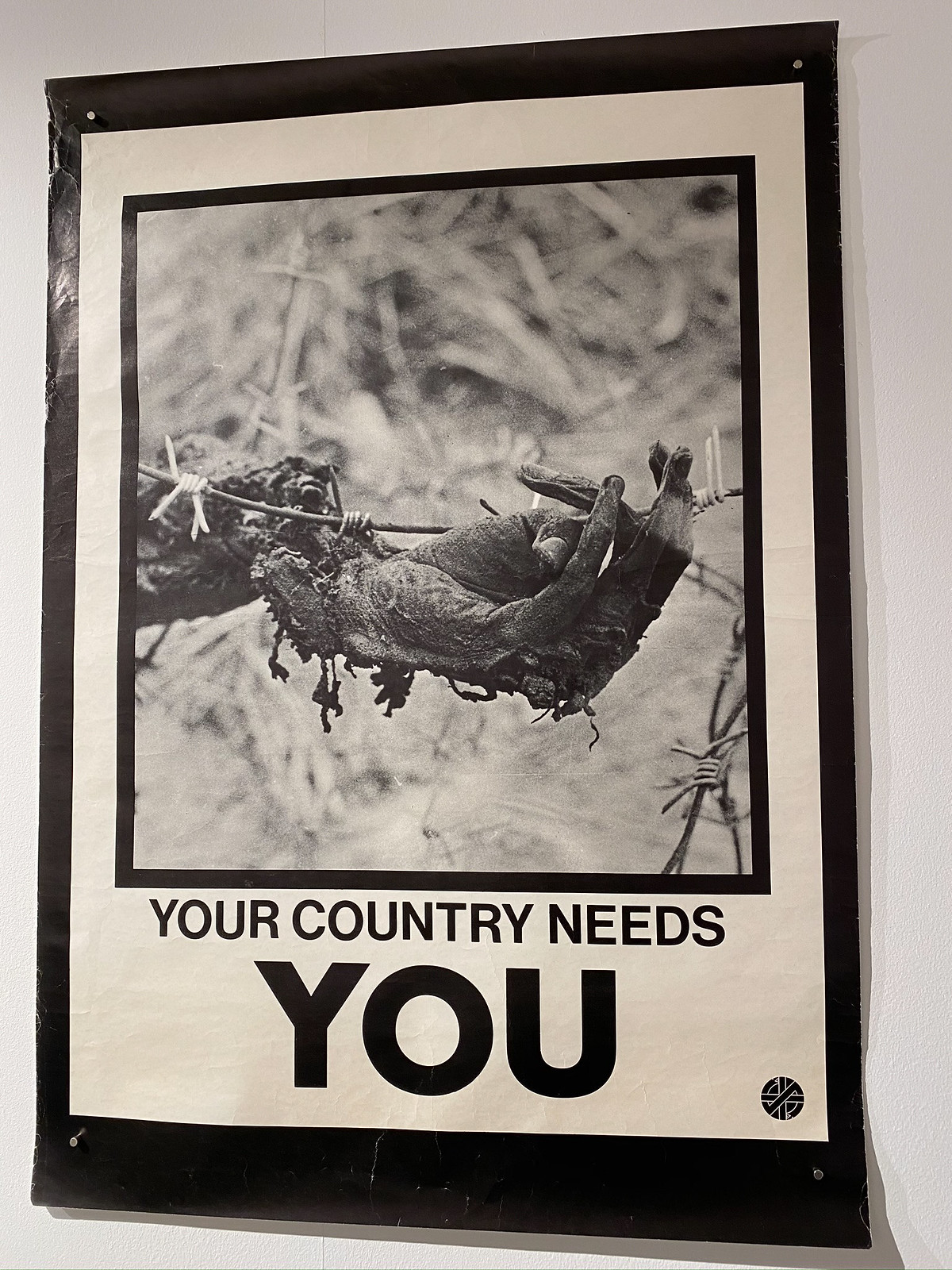 CRASS Band Punk/political artist Gee Vaucher’s “Your Country Needs You.” Anti-War song was released with the uncensored re-issue on The bands album “The Feeding of the 5,000.”

American artist Pettibon came to prominence in the early 1980s in the southern California punk rock scene for the Black Flag album covers and band logo. His target in the Zine zine above was the drug-wrecked hippie movement of the 1960’s. 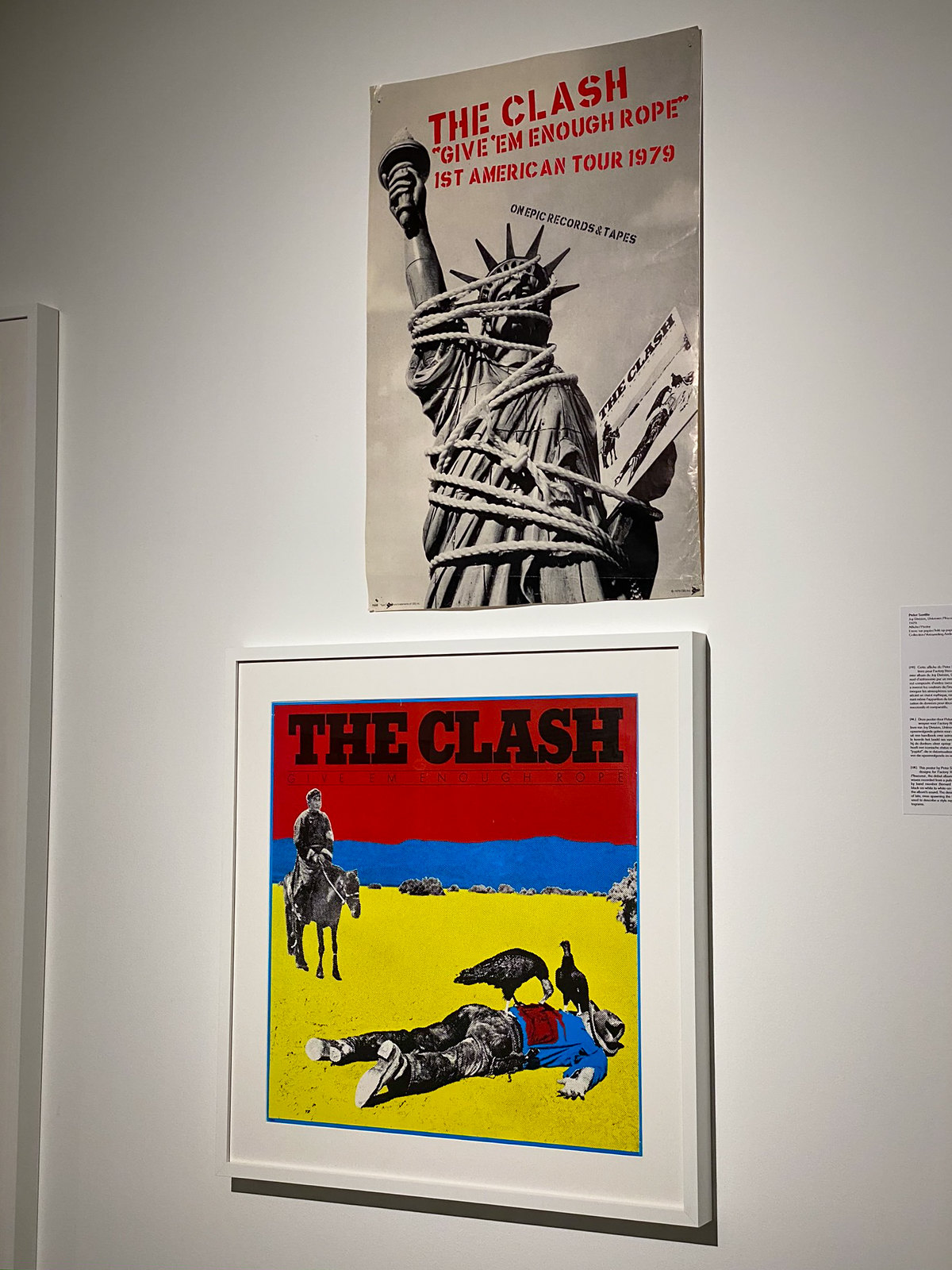 The Clash 1979 Tour & Give them enough rope album posters 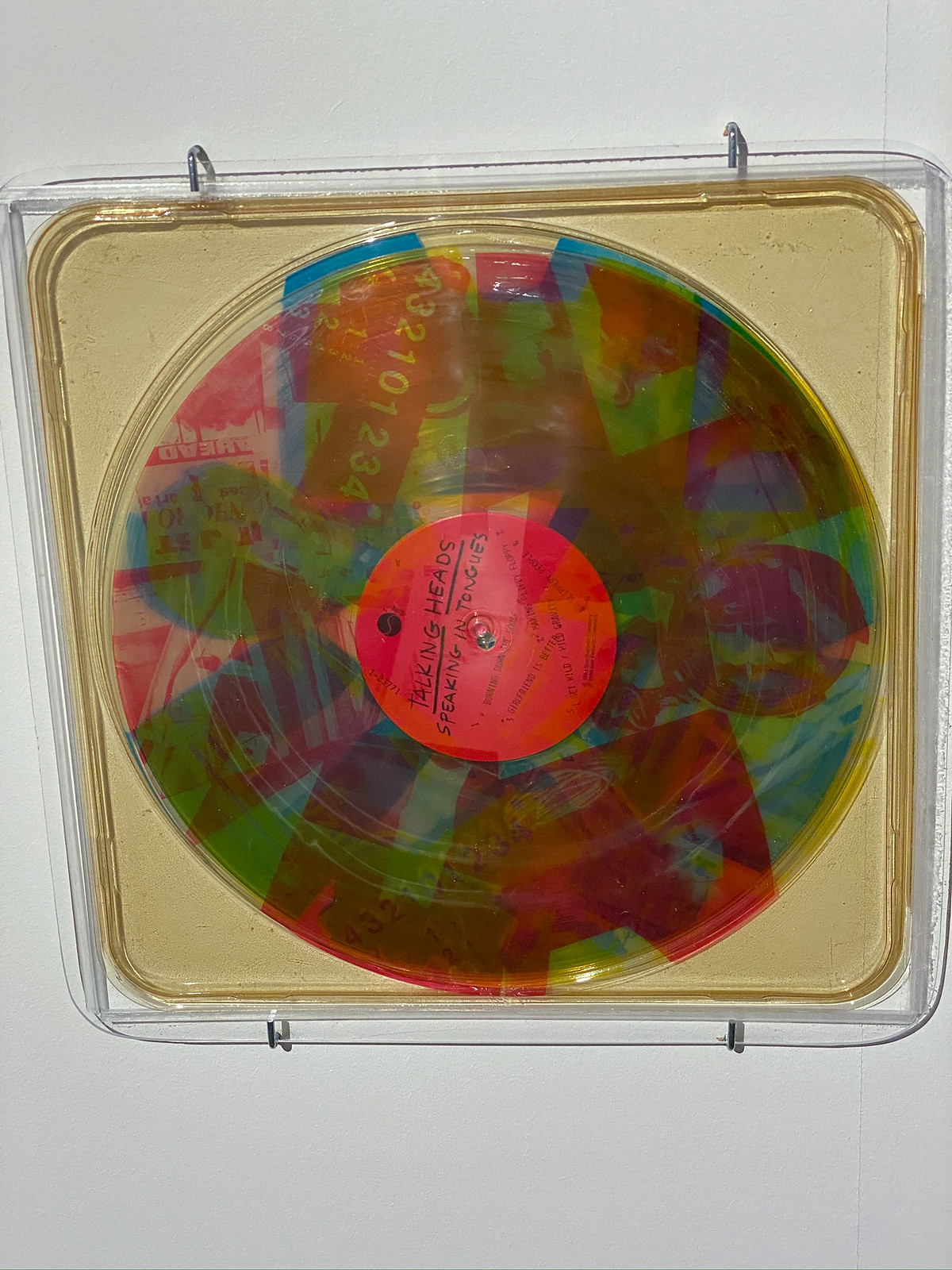 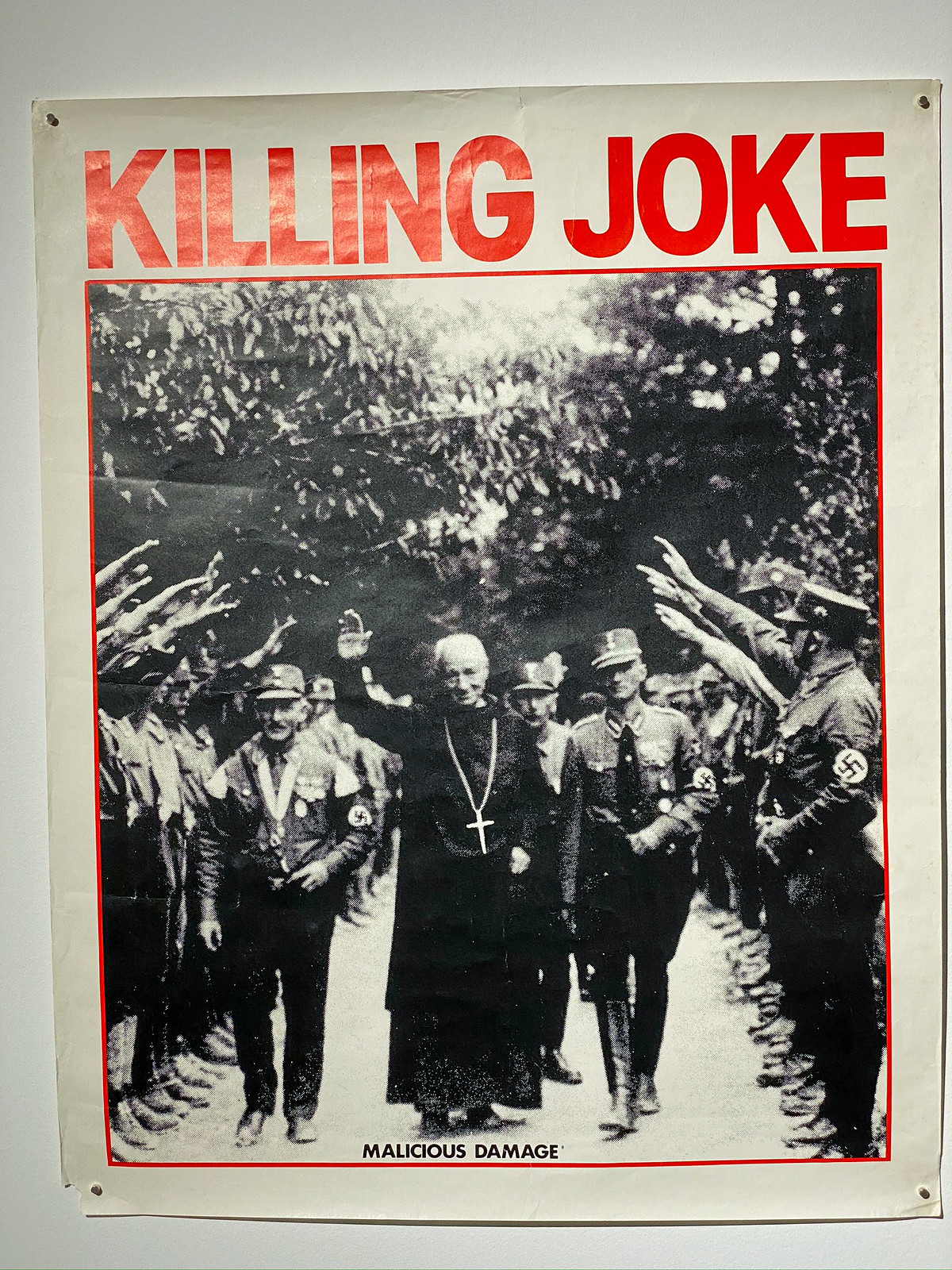 Punks often used dark humor imagery to provoke, the picture of German abbot Alban Schachleiter walking among rows of Nazi brownshirts offering Hitler salutes and appearing to return the salute is a great example and was used for a concert poster in the early 1980 while promoting the Malicious Damage album and was also used on Laugh? I Nearly Bought One!