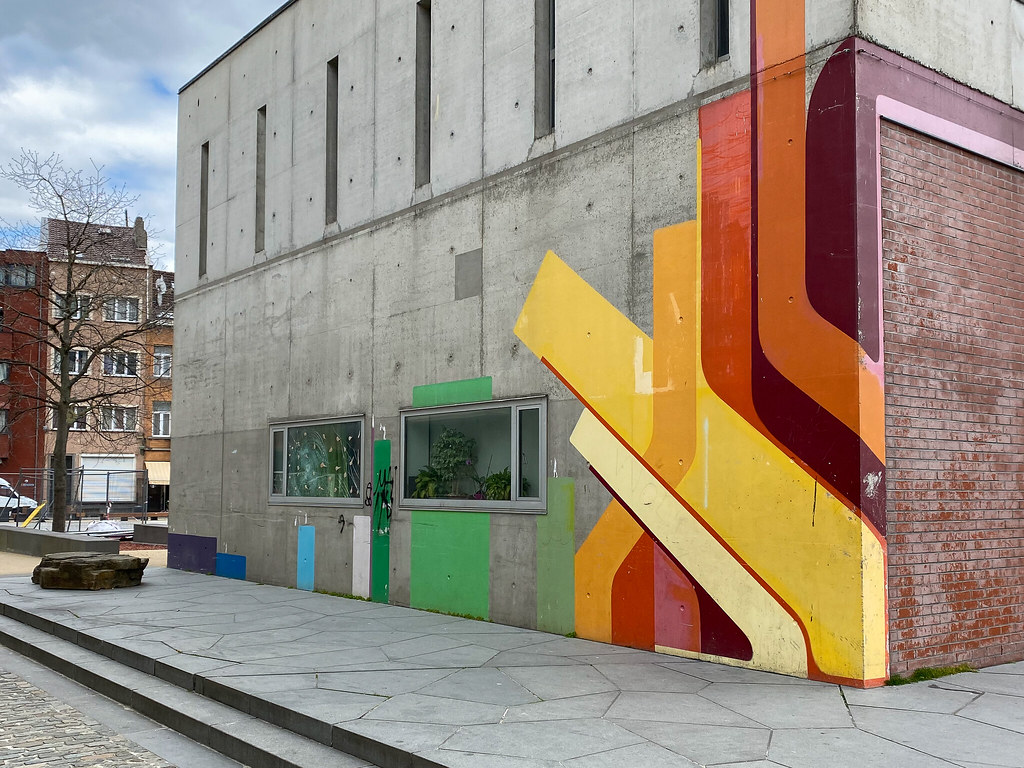 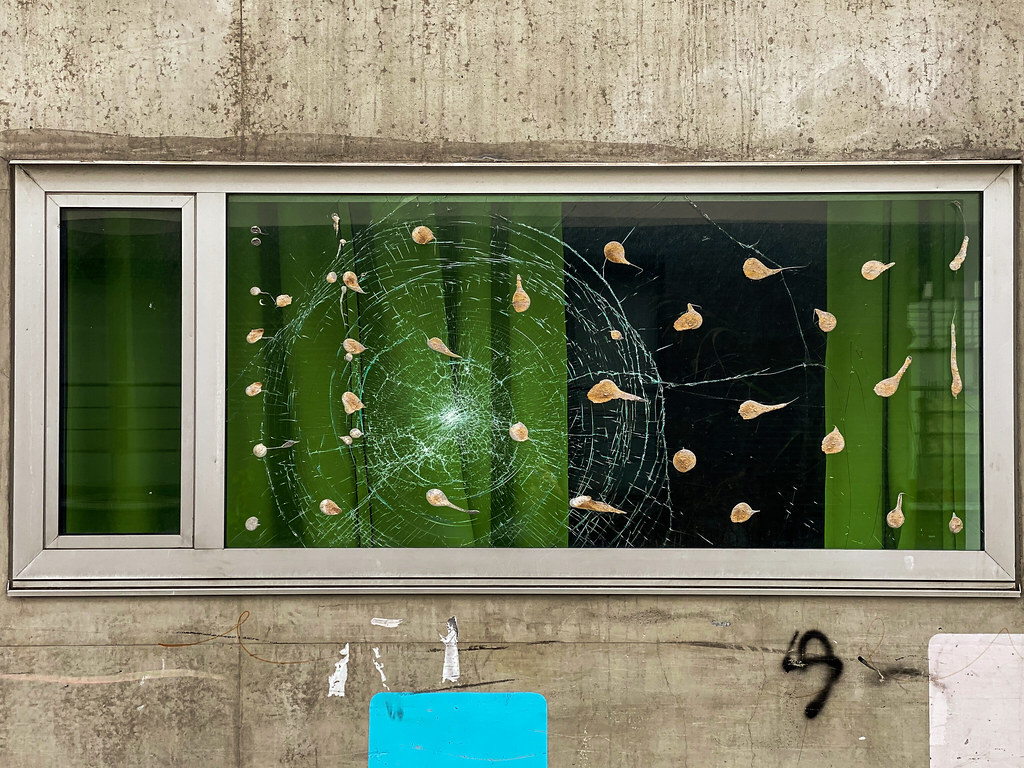 Commissioned by visit.brussels, the ASBL Urbana Project has been putting creativity of both local and international artists at the service of the Region to brighten up the walls of several districts of Brussels. 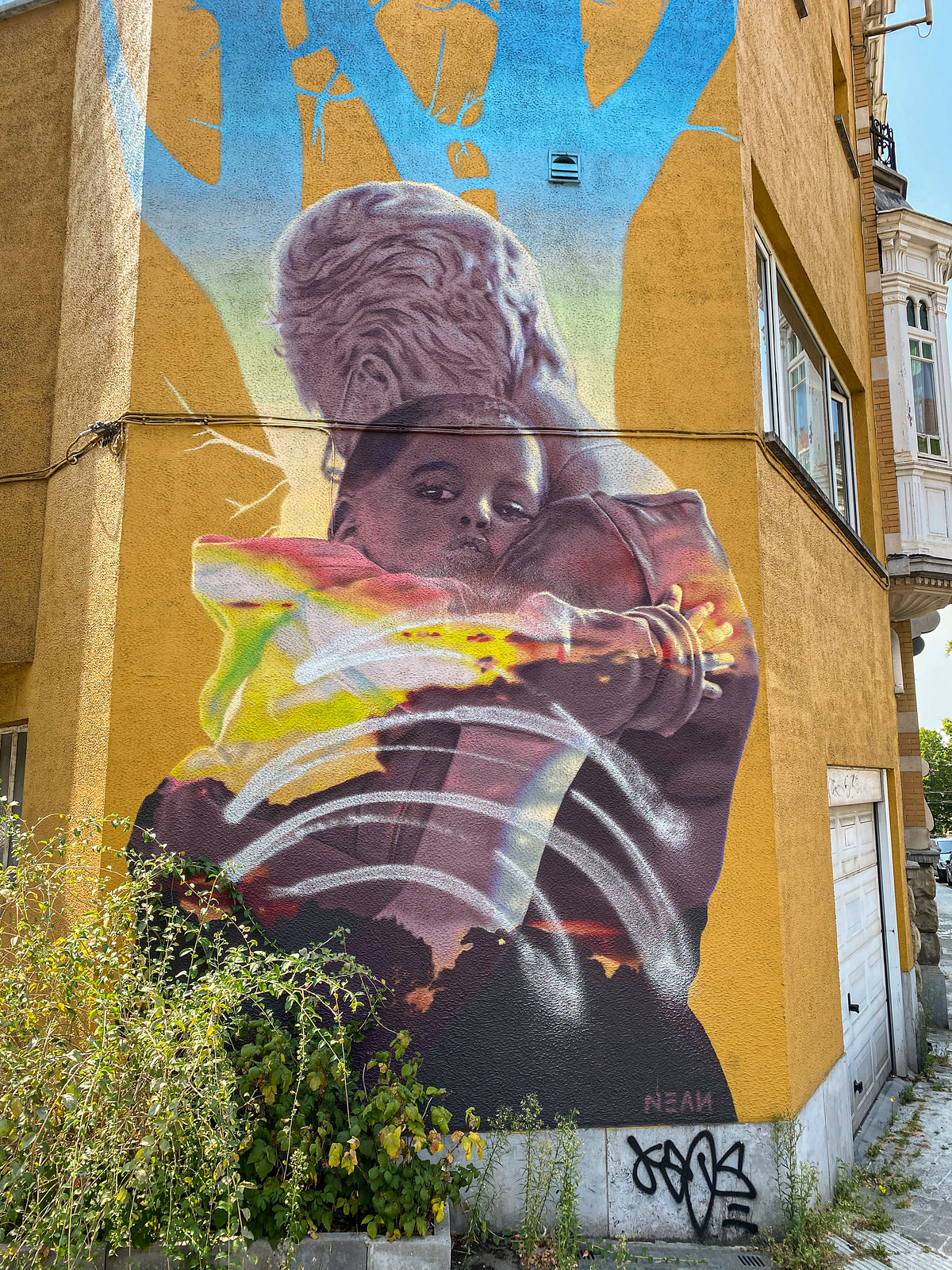 The “Au pied dâ€™un arbre” mutal or at the foot of a tree in English, serves as a symbol of genealogy, where both old and new generations come together. This meeting, which is a source of discussion, represents the strong bond and hope essential to building the world of tomorrow.

NEAN is a Belgian street graffiti artist who grew up in Brussels. Self-taught, he made his debut on paper before turning to spray paint. In 2014, he joined the famous Belgian collective Propaganza, made up of around twenty artists from Belgium, France, Spain and England. Influenced by traditional painting and digital art, his work gravitates between an experimental style and photo realism. Curious about everything, he multiplies the tests on large supports, alternating digital painting, painting on wall and painting on canvas.

The “Square des Griottiers” or “Square of the cherries trees” takes its name from the three big morello cherry trees planted here. This is the same type of cherry tree used to produces the famous cherry beer Kriek in Brussels. Located in in Schaerbeek at the crossroads of the avenues of FÃ©lix MarÃ©chal, Emile Max and Milcamps, This is tiny island of lush greenery is a little haven of peace in an urban residential area. The square is best known for the little statuette “Joies de Printemps” which translates to Joys of spring in English.

The paved path allows visitors to discover the wide variety of shrubs, grasses and flowers that adorn the square. In addition, a fourth sour cherry tree will be planted while two benches will be installed.

The Joys of Spring sculpture by EugÃ¨ne Canneel is at the center of the Square des Griottiers. Interesting fact, both the cherry and the donkey are symbols of this municipality of Schaarbeek, as in the old days cherries who grew here had to be carried on the back of donkeys to be sold on the Brussels markets downtown.

The Schaarbeek train station is a splendid work of architecture that was built in a Flemish Neo-Renaissance style between 1864 and 1913. Once an important international railway station it now serves but a few small regional routes and gives basic service for commuters during peak hours for getting in and out of Brussels. The access to the main building itself is closed daily at 13:30 and during the week-end. The interior would definitely need some work. Located at 5 Place Princesse Elisabeth, 1030 Brussels

The front of the Shaarbeek train station

View from behind the station where the train tracks are

Close up on the back of the railway station building

Most Belgian trains just pass by without coming to a halt

Ã‰glise Saint-Servais or in English the Saint Servatius church of Neo-Gothic style was built in between 1871 to 1876 and is located in the municipality of Schaarbeek.

Saint Servatius church from one of its sides

Eglise Royale Sainte-Marie, or in English St. Mary’s Church is located in the municipality of Schaarbeek. Built in 1845 it is somewhat of an oddity since it’s the only Romanesque-Byzantine style church in Brussels. The architect Louis Van Overstraeten who designed it found inspiration from the Basilica di San Vitale in Ravenna, Italy.

Approaching the church from rue Royale

Right in Front of it

A view of the many towers

The impressive dome has been decorated with stars

directly from the back

La Maison communale de Schaerbeek or in English the Town Hall of Schaarbeek is a building of Neo-Gothic style that was finished being built in 1887.

Just in from of the Schaerbeek town hall from the square

Statue on a corner