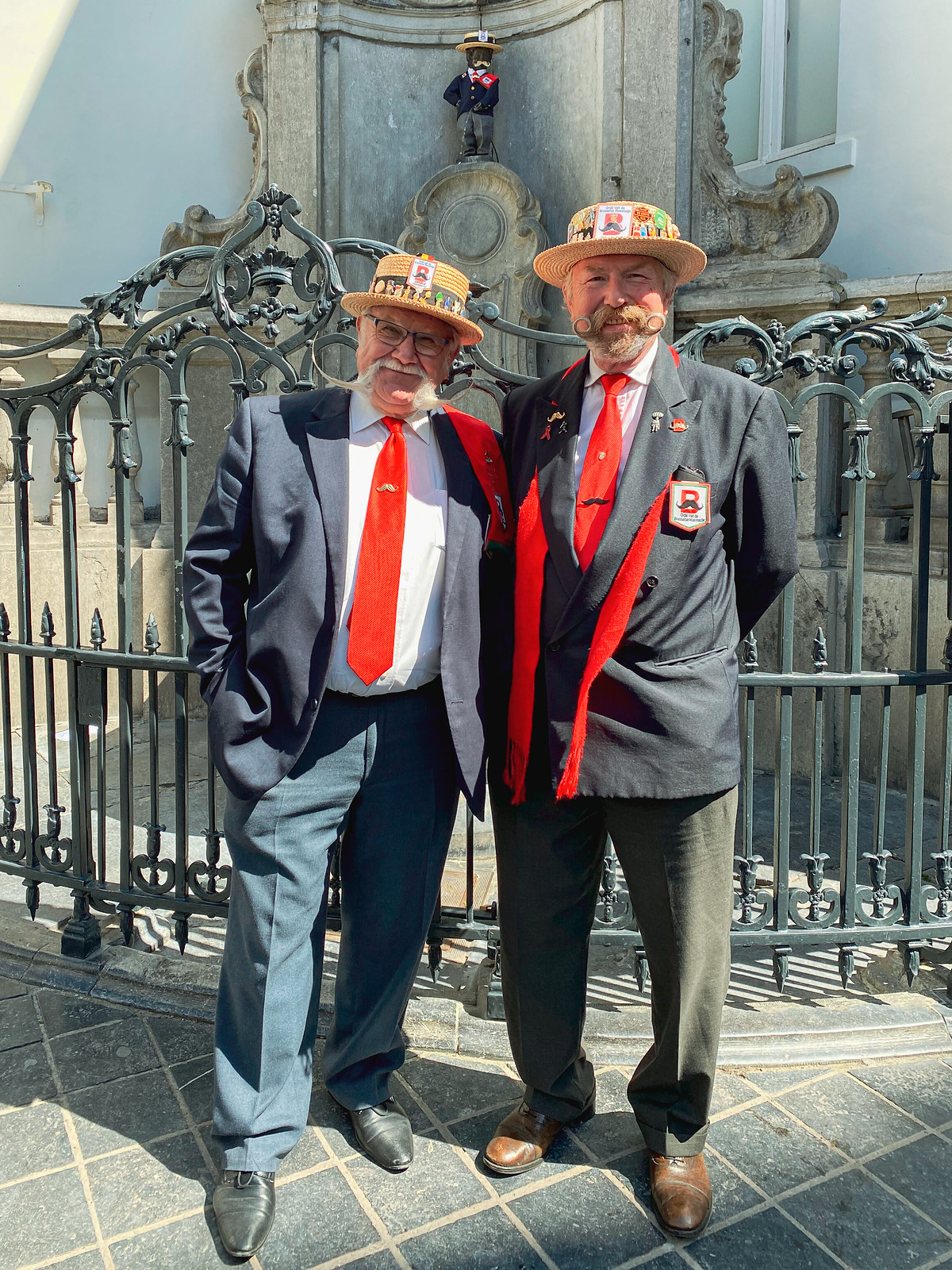 The statue of King Leopold II riding proudly on his horse at Place du TrÃ´ne, just steps away from the Royal Palace has been once again vandalized and spray-painted with various tag lines. Prominently across the King’s chest, we could see a big “Pardon”. Other messages read “Fuck racism” or “This man killed 15 Million people”, a “BLM” in reference to the Black Lives Matter movement, was also found on the base of the statue. This is the same effigy of the King that had already been targeted Sunday, June 7 after the march against racism organized in front of the Law Courts of Brussels.

The hands of Leopold II on his horse were symbolically painted red in reference to the blood that the king had on his hands for crimes perpetrated against the native population during the Congolese Colonial era.

Additional tag-phrases such as â€œKing Assassinâ€, â€œfuck Uâ€ or â€œNo justice, No peaceâ€ were also spray painted on the base of the monument to King Leopold in Place du TrÃ´ne.

Another statue of Leopold II had also been similarly targeted in the gardens of the Museum of Africa just on the outskirts of Brussels in the municipality of Tervuren.

The same modus operandi, using red paint to deface Leopold II. Under the statue, surrounded by animals and native congolese, is spray painted the word “FDP”. An acronym for “Son of a bitch” in French.

But the vandalism didn’t end with King Leopold II, statues of other Belgian monarchs such as the the King Baudouin were also defaced with red paint in front of the Cathedral of Saint Micheal and Gudule, right in the center of Brussels.

The words “Reparations” can be seen tagged on the back of this statue, it was during King Baudouin’s reign in in 1959 that he announced the intention of the Belgian Government to grant independence to the Congo.

On June 30, 1960, he traveled to the Congo to witnessed the transfer of power in Kinshasa (still called LÃ©opoldville at the time). During this ceremony, the King delivered a speech which was later considered by many to only glorifying the Colonial work and ignore of the wrongdoings committed during the era of Belgian rule in the country.

Other statues of the King LÃ©opold II have also been defaced throughout Belgium in the cities of Hal, Ostende and Ekeren as seen in the picture above. Leopold II is criticized for some atrocities that took place in the Congo in the 19th century, when the territory belonged to him personally. The debate on the presence of such monuments in public space, and more broadly on the colonial past of Belgium and the role of the second Belgian sovereign reappears at regular intervals.

Only a very small minority actually support the removal or vandalizing of statues of Leopold II (25% according to the latest polls), but as usual in today’s world, it is more often minorities who dictate their ideology to the majority. The reign of Leopold II corresponds to a period when Belgium is – briefly – the second industrial power in the world and it is during this period of great prosperity, that the King redesigned Brussels and had some of the cities’ biggest landmarks built.

But make no mistake! This is only a small part of their much bigger agenda. In the UK, we’ve seen the venerated Admiral Nelson, winner of Napoleon at Trafalgar being defaced, as well just recently statues of Sir Winston Churchill, the revered icon of WWII.

The choice of the people targeted, even the most illustrious, is secondary. This is not a question of putting words that are unacceptable today in their historical context, but to eradicate a supposed “colonial mentality” still pervasive in the minds of white people.

Decolonization activists and their new allies of the radical left want to put an end to the West, wipe out it’s history, civilization and what it represents.

Like in the old days of communism or more theocracies such the Islamic State tried to impose, it is a question of eradicating the old world in order to build a brand new “radicalized” future. Where everyone is labeled under a certain category and views are scrutinized by a thought police and everyone made to conform to the new dogma.

As they say in politics, The road to hell is paved with good intentions. There is no better time than now to pick up and read once more “Brave New World” (Huxley) or “1984” (Orwell) in order to prepare for what’s to come if boundaries are not set now.

Another bust, this time of the Lieutenant General Ã‰mile Storms, who acted in Africa as a soldier, explorer and official for the Congolese Free State between 1882 & 1885. Strangely enough he was know for trying to suppress the East African slave trade.

Belgium is most likely the only country in the world to possess a statute to honor the “pigeon soldat” or soldier pigeon and his contribution during both Great World wars.

Whether released at 500 m or 100 km from home, even in certain cases over 1,500 km, the messenger pigeon has that fantastic ability to always know its way back.This trait was detected a long time ago, notably by Julius Caesar who, during the invasion of Gaul, used homing pigeons to send messages back to Rome to inform headquarters of his campaign’s progress.

On the other hand the Myth of the pigeon that you sometimes see in movies which is released and asked to take a message somewhere and then return, doesn’t exist. The pigeon is only able of returning home. This is why, in order to send a message to several places, pigeons raised at each destination have to be taken out.

These Bronzes Statues of young girls are found in front of the Charlemagne building which is one of the many the European Union Institutions of Brussels. They were made by sculptor RenÃ© Julien in 1998. Located right next to the Shuman subway station at 170 Rue de la Loi.

The set of bronze sculptures in their entirety

The statue to the right is called L’espÃ©rance (Hope)

The Statue of Archangel Michael patron Saint of the city of Brussels can be found standing proudly on top of a building on the corner Rue Locquenghein and Quai au bois de construction just after the MarchÃ© aux Poissons.

The Man from Atlantis statue is part of a fountain created in 2003 by sculptor Luk Van Soom. It is Located just in front of the Hilton at 38 Boulevard de Waterloo in between the Porte de Namur and Louise subway station.

Charles Woeste (1837-1922) was a Lawyer and an important Political figure of Belgium. He played a big role in the foundation of the Catholic Party in his earlier career then moved onto being a member of the parliament and eventually became Minister of Justice. As gratitude for his service to the country in 1914 and was granted the title of Count by King LÃ©opold II.

The statue of Godfrey of Bouillon is located at Place Royale or in English at Royal Square right in front of the Saint-Jacques-sur-Coudenberg church. Born around 1060 in Baisy-Thy, province of Brabant in what is part of modern-day Belgium he was the first King of Jerusalem. He followed Pope Urban II’s call for the liberation of Jerusalem and led the first Crusade from 1096 to 1099 to recapture the Holy Land. He died shortly after in Jerusalem on the 17 of July 1100.

Queen Elisabeth of Belgium statue, born Elisabeth of Bavaria. Her ascension from Duchess to Queen came in 1900 when she married Prince Albert who later became King of Belgium and reigned from 1909 to 1934. She became popular among the Belgians during WWI for her visits on the front lines to wounded soldiers and being a sponsor of a nursing unit. She founded in 1937 a musical festival that was renamed later in her honor the Queen Elisabeth Music Competition that is world famous to this day.